In a video shared on social media by his reality star girlfriend, the 'Saturday Night Live' comedian is seen having the same bleached hair as her while he plants a kiss and hugs her.

Pete was seen planting a kiss on Kim in the Sunday, May 29 video shared on "The Kardashians" star's Instagram Stories. The first clip saw the two of them using a demon filter that gave them matching blonde horns. Beside their matching bleached hair, they were wearing matching color outfit. The funnyman wore a black jacket, while the SKIMS founder rocked a black top.

The ex-fiance of Ariana Grande and the ex-wife of Kanye West playfully stuck their tongues out on screen. Seeing his girlfriend laugh prompted him to kiss her once more, which made her giggle. She followed up the clip with a black-and-white video that displayed them wearing matching black sunglasses and sticking their tongues out again. 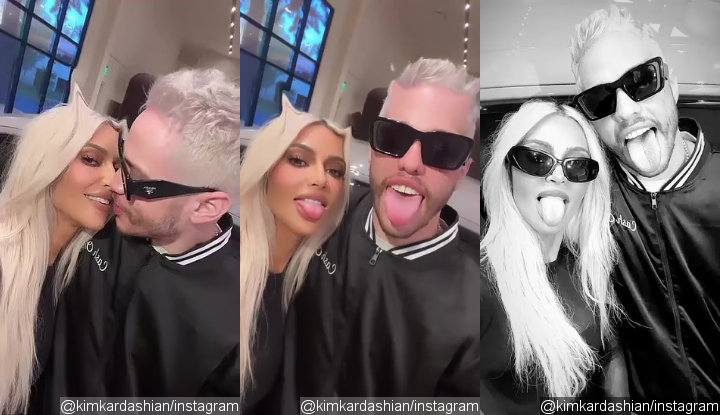 As for their romantic interaction off-screen, Pete, who announced his exit from "Saturday Night Live", was seen supporting Kim on set of SKIMS photoshoot on Friday, May 27. The 28-year-old comedian was spotted wearing a shower cap over his freshly new blonde hair on the set.

Pete has been in a romantic relationship with Kim for months. The two confirmed their relationship status in November 2021 after they were seen holding hands in Palm Springs, California. Their romance blossomed after having met on "Saturday Night Live", where Kim made her guest-hosting debut.

Though their relationship is relatively new, the twosome apparently got serious fast. In March, Kim revealed on "The Ellen DeGeneres Show" that Pete already has "more than three" tattoos of her on his body and her name inked on his chest.

In addition, 7News reported that Kim could potentially relocate to Australia later in 2022 to stay close to Pete. It was noted that Pete will be filming his new movie "Wizards!" in Far North Queensland. However, there has not been any confirmation on the report.