Through her social media account, the 'Black Widow' actress offers proofs that she spent the holiday with other friends who were cropped out of the pictures by paparazzi.

AceShowbiz - Florence Pugh is not letting rumors of romantic entanglement with Will Poulter slide. Through her social media account, the "Black Widow" actress squashed wild speculations that she is dating the "Maze Runner: The Death Cure" actor after their Ibiza getaway photos surfaced online.

The photos in question displayed the "Little Women" star splashing around the beach with her "Midsommar" co-star on Monday, May 23. In result, many speculated that there might be something going on between the two of them.

Unwilling to let the false rumor grow bigger, Florence immediately made use of her Instagram Stories to set the record straight. "Ooookay. Man. This is getting a little silly now," she explained on the Tuesday, May 24 Story. "No, Will Poulter and I are not dating." 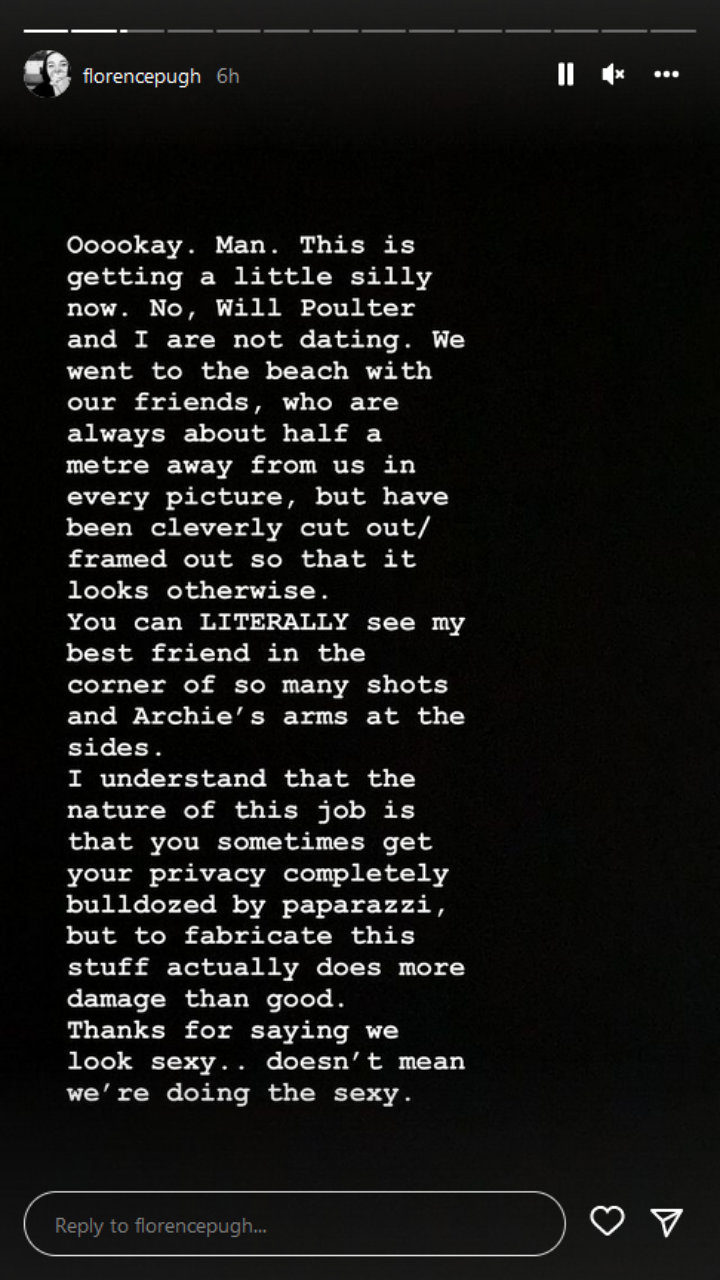 Florence addressed the dating rumors surrounding her and Will Poulter.

"We went to the beach with our friends, who are always about half a metre away from us in every picture, but have been cleverly cut out/framed out so that it looks otherwise," the 26-year-old actress went on divulging. "You can LITERALLY see my best friend in the corner of so many shots and Archie's arms at the sides."

"I understand that the nature of this job is that you sometimes get your privacy completely bulldozed by paparazzi, but to fabricate this stuff actually does more damage than good," Florence further reminded others. She then thanked fans for calling her and Will sexy, but stressed that it did not mean they were "doing the sexy."

Afterwards, the "Don't Worry Darling" actress shared the pictures that proved her best friends were, in fact, there with her. She first put up one picture that saw her in the beach with two friends. "Best mate who came on the holiday with me," she pointed out in the picture, "Other best mate Will P, who was cropped to look like his face was on my chest.." 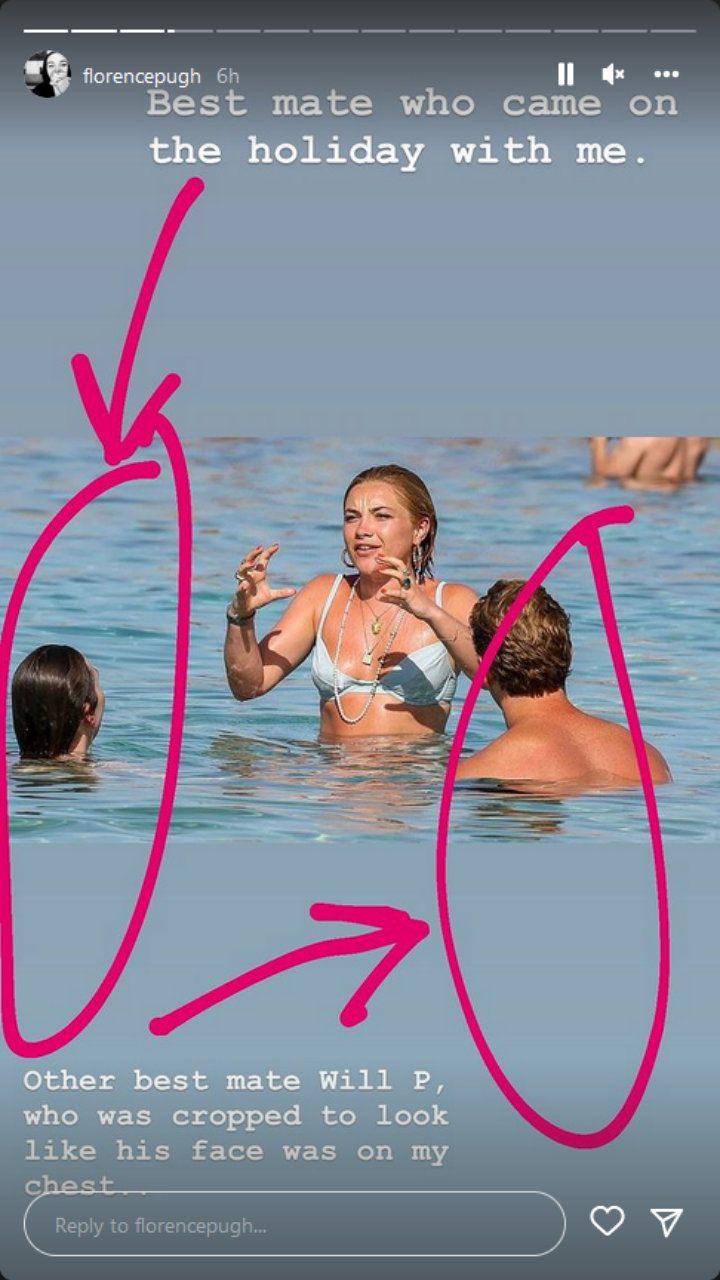 Florence showed that her other friends were there with her.

The "Lady Macbeth" star then proceeded to offer a second picture of her and Will. She drew a circle on a woman wearing a black bikini to show that it was actually her best friend, but was cropped out of the paparazzi picture. In the next Story, she let out a picture of her. "This is my best mate Olive, who I actually DID snuggle with for hours on this bed," she wrote.

"Probably can see the paps in the distance.. hiding behind some poor family," Florence continued, "Waiting for the optimum time of 'let's make a fake relationship' happen. Grosssssss." The "Malevolent" actress also shared a picture of Will and her other guy friend, showing that they were laying on a separate beach bed. 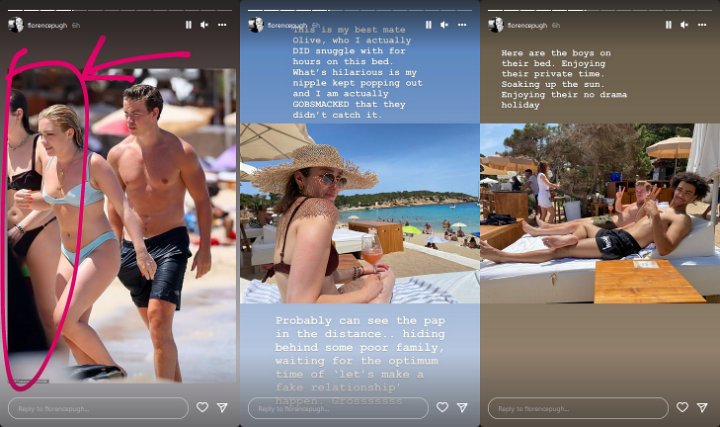 Florence offered proofs that showed her friends were cut out from the pictures.

After setting the record straight on the whole situation, Florence wrote a message to remind people to be more mindful of what they write online. "On another note, a very important note," she stated, "There's no need to drag people through this."

"Regardless of your opinion on who I should or shouldn't be with, at the end of the day if you're complimenting someone by trolling another person.. you're just bullying," she stressed. "There's literally no need to be horrible online - no need. Think about what you write. Think about who it affects." 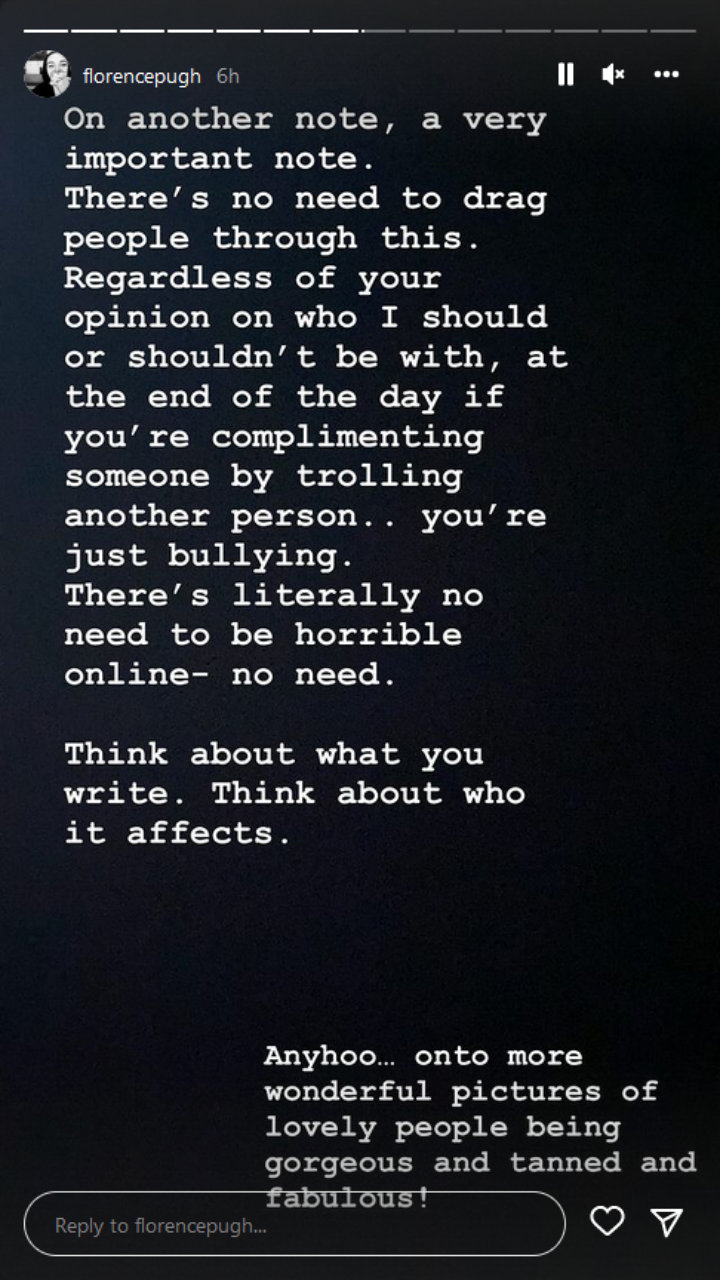 Florence reminded people to be more mindful of what they write online.

Florence has been dating Zach Braff since 2019. In April, "The Falling" actress took to her Instagram account to wish her boyfriend a happy birthday. "Happy Birthday Zachary!" she wrote on a since-expired Story.

Florence Pugh to Return to Music Roots With Solo Album