The wife of Justin Bieber thanks her supportive fans for reaching out to her and sending her 'kind messages' after she opened up about her 'really scary' heart surgery.

AceShowbiz - Hailey Baldwin is grateful to have supportive fans. The wife of Justin Bieber has credited her fans' support for making her health journey "feel less scary" after she opened up about undergoing heart surgery following "mini stroke."

On Thursday, April 28, the supermodel took to Instagram Story to express her gratitude to those who showed some support after she shared a clip of her detailing her recent medical scare. "Thank you for all the kind messages, and thank you everyone who reached out after yesterdays video," she wrote over a black screen.

"Hearing so many people share their experiences and having that shared journey with so many has made all of this feel less scary," Hailey concluded her note. The 25-year-old beauty also added a butterfly and a white heart emoji. 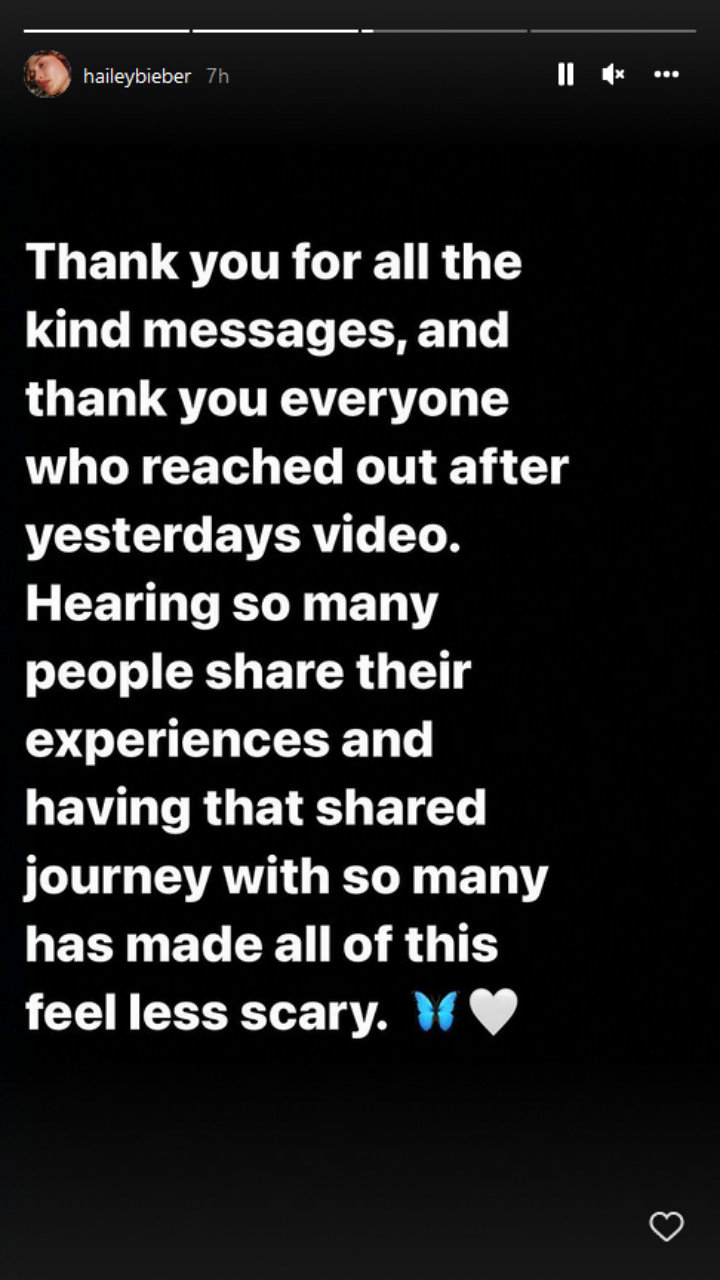 Hailey Baldwin thanked her fans for their 'kind messages' after she opened up about her heart surgery due to 'mini stroke.'
Editors' Pick

On Wednesday, Hailey shared a 12-minute video, titled "Telling my story", on her YouTube page. In it, she told the viewers that she recently had a patent foramen ovale (PFO) closure procedure performed to mend a hole in her heart.

"It went very smoothly … I'm recovering really well, really fast," Hailey assured her fans that she's okay. She added that doctors told her she had suffered the clot due to side effects from birth control pills, COVID-19 and a long haul flight. After undergoing some tests, it was revealed that she had a grade-five PFO, which is the largest category of a hole in the heart.

Hailey explained, "When I went to UCLA we did more in-depth testing … to find a PFO," before describing a PFO as "a flap between the right and left chambers of the heart." She added, "Typically at birth it's supposed to close on its own," noting that hers didn't close.

"They found that I had a grade five which is the highest grade you can have. Mine was fairly large," Hailey shared. "What typically happens is the heart will filter the blood clot to the lungs and the lungs will absorb it because they're so big and they can handle it." However, the blood clot "escaped through the hole in my heart and traveled to my brain and that is why I suffered a [mini stroke]."

Hailey, who was rushed to hospital in the Palm Springs area for "mini stroke" last month, later said she was "just grateful that they found it," adding that her doctors performed a procedure in which they use "a button" to close the flap in the heart. She later assured her fans that she's now okay as saying, "I'm really relieved I will be able to just move on from this really scary situation and live my life." She also stressed that she is now feeling "much better."