After Michael Williams, a man who killed Sutton Tennyson, is sentenced to life in prison, the 'Growing Up Hip Hop' star says that she will always keep herself and their baby boy 'smiling.'

AceShowbiz - Angela Simmons has expressed her gratitude after a man who killed her late ex-fiance was sentenced to life in prison. Taking to social media, the "Growing Up Hip Hop" star has vowed to stay "strong" after "receiving justice."

On Friday, April 15 following the conviction of Michael Williams, who killed her late ex-fiance Sutton Tennyson five years ago, the reality star took to her Instagram Story to share a message that read, "Not speaking on your pain, doesn't mean it doesn't affect you. Always staying strong for my baby. Even days outside of receiving Justice." She further pointed out, "Our life will never be the same."

Angela, who shares her 5-year-old son, Sutton Joseph Tennyson, with Sutton Sr., went on to promise that she "will always keep [herself] and baby boy smiling." She added, "Life is simply too short. Long as I'm breathing I got this." She concluded her message as saying, "I don't share everything, but what I do share, means a lot," with a couple of white heart emojis.

In a separate Story, Angela uploaded a photo of Sutton posing with their son on his shoulder. "We got you! Justice served today," she wrote underneath the snapshot, adding a red heart emoji. In another post, she shared an image of her and Sutton with a caption that read, "We got you." 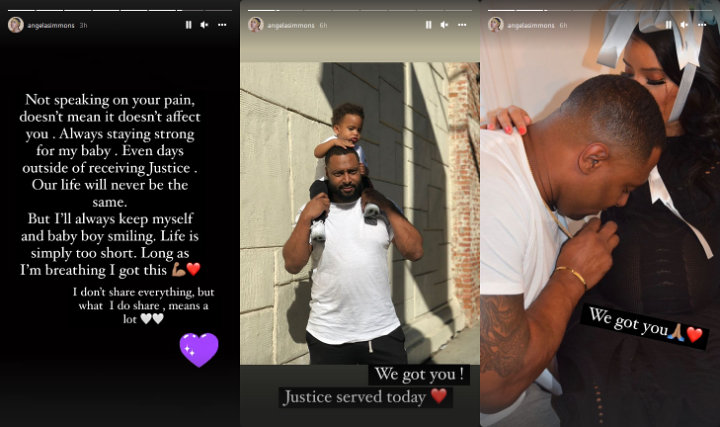 Not stopping there, Angela also posted a series of throwback photos with Sutton. In the first slide, the 34-year-old designer and her late ex-fiance could be seen celebrating their child's birthday. Another picture saw the couple smiling while cuddling. "Justice served today! We got you ! We got him," she captioned her post.

Earlier that day, Michael was sentenced to life in prison for murder. He was also hit with an additional 15 years for possession of a firearm by a convicted felon. It was said he'll be eligible for parole after serving a minimum of 30 years behind bars.

While giving her testimony against Michael in court, Angela tearfully revealed that her son "constantly asks" when his dad "will come back." She also claimed she cries "all the time" when remembering how excited Sutton was about raising their baby before his death.

Angela and Sutton got engaged in 2016, the same year they welcomed their baby. The couple broke up in 2017. In November 2018, Sutton was found dead in his garage with multiple gunshot wounds.

Olivia Munn Gets Candid About Her Postpartum Struggle With Hair Loss