Hitman Holla Has No Regret After Intimate Video With Girlfriend Leaked: 'It's All Good'

The 'Diddy Dum Dum' emcee claims his girlfriend Cinnamon was aware when he shared the video to his 'close friends' Story on Snapchat, adding, 'Not tripping I knew the risk.'

AceShowbiz - Hitman Holla has broken his silence after his sex tape with his girlfriend spread on social media. Acknowledging that it was him and his girlfriend Cinnamon who were seen in the intimate footage, the rapper seemingly has no regret for sharing the video with his "close friends" on Snapchat before someone reshared it online.

Addressing the leak, the 33-year-old posted on Instagram Story on Wednesday, December 15, "N***as caught me slipping once okay, so what?" He insisted that his girlfriend was aware when he shared the video to his "close friends" Story on Snapchat, "Ima only clear up one thing... Cinnamon in my close friends.. She knew every female I had in there (30 of them). She green light anything I post like let's not act dumb.."

Hitman, whose real name is Gerald Fulton Jr., then revealed when he posted the video on Snapchat, "Somebody screen recorded my close friends November 5th (our anniversary) that's wen I posted them videos.."

Admitting that it was intentional, he added, "Not tripping I knew the risk.. Ppl wasn't solid it's all good.." He went on defending his relationship with Cinnamon as saying, "What works in me and Cinnamon relationship might not work for y'all and that's ok but understand I don't care what y'all do w/yall partner nun of my business but understand Ima do me. Enjoy y'all day." 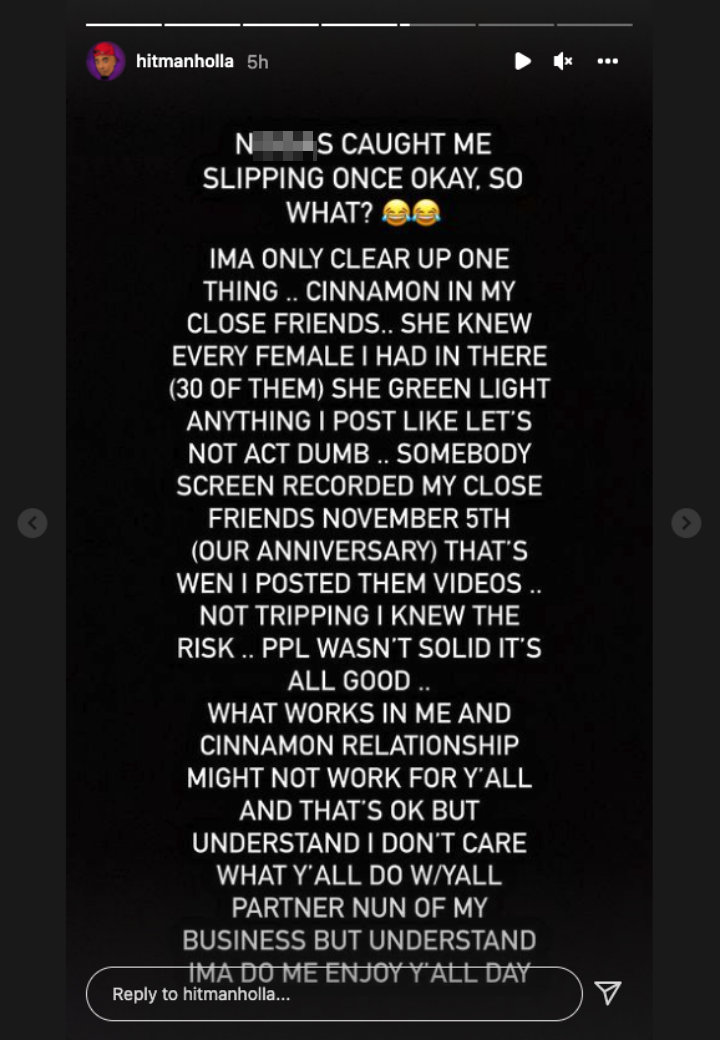 Social media users went wild after the NSFW video made its round on the web. "WELL I LIKE THE VIDEO SHARED BY HITMAN BUT I THINK THIS IS SOMETHING SO PERSONAL WHICH MUST NOT HAVE BEEN SHARED LIKE THIS ON ANY OF THE SOCIAL MEDIA PLATFORMS," one person commented on the leaked tape. "I THINK HE DID IT BY HIM AND THEY ALWAYS OVERSHARED AND IT WAS ALL DONE BY THEM INTENTIONALLY."

Another shocked user wrote, "A VIDEO IS SO WILD EVEN FOR THE CLOSE FRIENDS TOO." Echoing the sentiment, someone else added, "THIS IS SO WEIRD OF POSTING SUCH A MOST PRIVATE THING EVEN TO THE CLOSE FRIENDS."