Bill Nelson, NASA's administrator, claims that the new high-tech Double Asteroid Redirection Test (DART) is 'something of a replay' of the action star's 1998 movie 'Armageddon'.

AceShowbiz - "Armageddon" star Bruce Willis turned down an invite to watch the test launch of a defence rocket designed to take out asteroids like the one he and Ben Affleck battled in the 1998 movie.

Officials at the National Aeronautics and Space Administration (NASA) were disappointed the action star did not attend Tuesday night's (November 23) lift-off, especially since the science-fiction thriller just may have inspired the new high-tech Double Asteroid Redirection Test, aka DART.

"DART is a first of its kind planetary defense test that will intentionally crash a spacecraft into an asteroid to help us prepare for asteroids that might one day pose a danger to Earth," Bill Nelson, NASA's administrator, tweeted ahead of the launch. 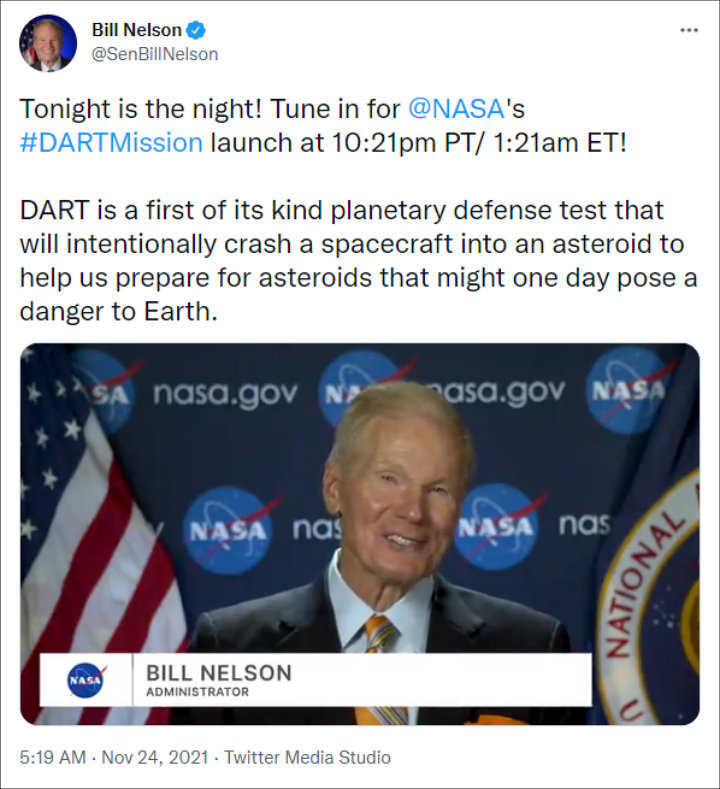 Bill Nelson announced the test launch of a defense rocket designed to take out asteroids.

"(It's) something of a replay of the Bruce Willis' movie, 'Armageddon', although that was totally fictional," he told the New York Times.

Naturally, the agency sent Willis an invite after his heroic turn in the Michael Bay movie, because "we didn't want to miss that connection."

Nelson did not explain why Bruce passed on the opportunity to witness the historic launch.

The spacecraft loaded onto the Elon Musk-made SpaceX rocket is, according to NASA, "designed to impact an asteroid as a test of technology to see if it can change the motion of an asteroid in space."

"The goal of the mission is to see if intentionally crashing a spacecraft into an asteroid is an effective way to change its course, should an Earth-threatening asteroid be discovered in the future," a release reads. "DART's target is the binary near-Earth asteroid Didymos and its moonlet, which pose no threat to Earth."

While the launch was successful, DART won't come into contact with the asteroids until late 2022. "DART's impact will happen in late September or early October next year, when the binary asteroids are at their closest point to Earth, roughly 6.8 million miles away," Nelson said.