In addition to sharing a sweet tribute to the fitness entrepreneur, the 'Coming Home' rapper reportedly throws a lavish birthday celebration which was attended by his sons King Combs and Justin Combs.

On Monday, September 27, the 51-year-old took to his Instagram Story to share a birthday tribute to Joie. Over a photo that saw the 33-year-old beauty posing in her white sparkling dress, he wrote, "Happy Birthday Queen @joiechavis." 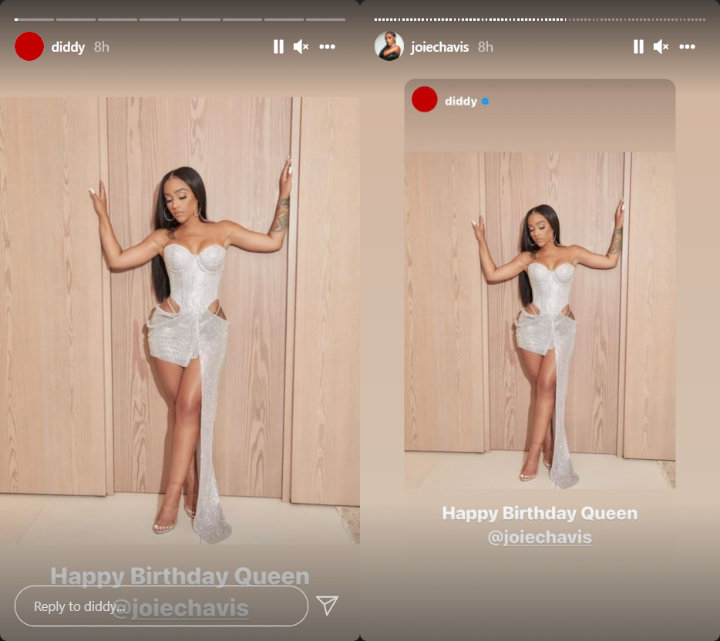 Shortly after receiving the sweet gesture from Diddy, Joie reposted the Story on her own account, leaving it without any additional message. Prior to the social media tribute, it's reported that Diddy threw a lavish birthday celebration for his rumored girlfriend. According to reports, the bash was attended by Usher, as well as Diddy's sons King Combs and Justin Combs.

While neither Diddy nor Joie has spoken up on the status of their relationship, Bow, who is the father of Joie's daughter, revealed that the two are dating following months of speculations. "I wanted to kill [Diddy]," joked the 34-year-old rapper after being asked if the rap mogul, or Joie, gave him a call to get his blessing before they started dating.

"Nah, I'm playing. [Joie and I] haven't really been in that place for probably thirteen years," Bow, whose real name is Shad Gregory Moss, said. "Really, that's a homegirl, my daughter's mom, so it's always gon' be respect. But don't think that I put a call in to talk to her about what the hell was going on."

Bow went on to confirm that he already spoke with Diddy. "And even me and dude, we spoke about it too. That's a conversation that I won't share but it was a good hour-and-fifteen-minute conversation on FaceTime," he shared.

Earlier this month, Diddy was caught frolicking with Joie while on a yacht in Ibiza. This prompted Yung Miami, who was rumored to be dating Diddy, to unfollow Joie on Instagram. In photos surfacing online, Diddy and Joie were pictured kissing and cuddling on a couch.

At one point, Diddy, who donned a green shirt and print shorts, was seen lying on top of Joie as she was relaxing on a lounge chair. The Bad Boy Records founder was also caught hugging the fitness entrepreneur, who showed off her curves in a black-and-yellow two-piece bikini, from behind.

'The Voice' Recap: Singers Show Off Their Skills as Blind Auditions Continue