Vivek J. Tiwary, Arvind Ethan David and Eva Price react to the allegations made by their former non-binary cast member about being prevented from having necessary surgery.

AceShowbiz - Producers of the Tony-nominated Broadway musical "Jagged Little Pill" have enlisted a team of experts to investigate claims of "intimidation" and "coercion" by former cast member Nora Schell.

The non-binary actor and singer, who uses the pronouns they/them, made allegations on Friday, September 24 that they were prevented from having necessary surgery for polycystic ovarian syndrome, and that the news was either ignored or downplayed by a "Jagged Little Pill" stage manager when they appeared in the musical in 2019.

In their Friday tweet, Nora wrote, "During previews for the Broadway run of JAGGED LITTLE PILL I was intimidated, coerced and forced by multiple higher ups to put off CRITICAL AND NECESSARY surgery to remove growths from my vagina that were making me anemic. Surgery my doctor told me was urgent."

Nora attached a lengthier statement, with claims that the show's creative team members did not inform stage management staff about their severe health issues, which included "passing in and out of consciousness" due to anemia.

"We are deeply troubled by the recent claims that have been made by a former cast member," said "Jagged Little Pill" lead producers Vivek J. Tiwary, Arvind Ethan David, and Eva Price in a statement shared to Deadline on Saturday.

"We met with our cast and members of our core creative team today to let them know we take this matter very seriously, and to share with them the actions we are taking in response." 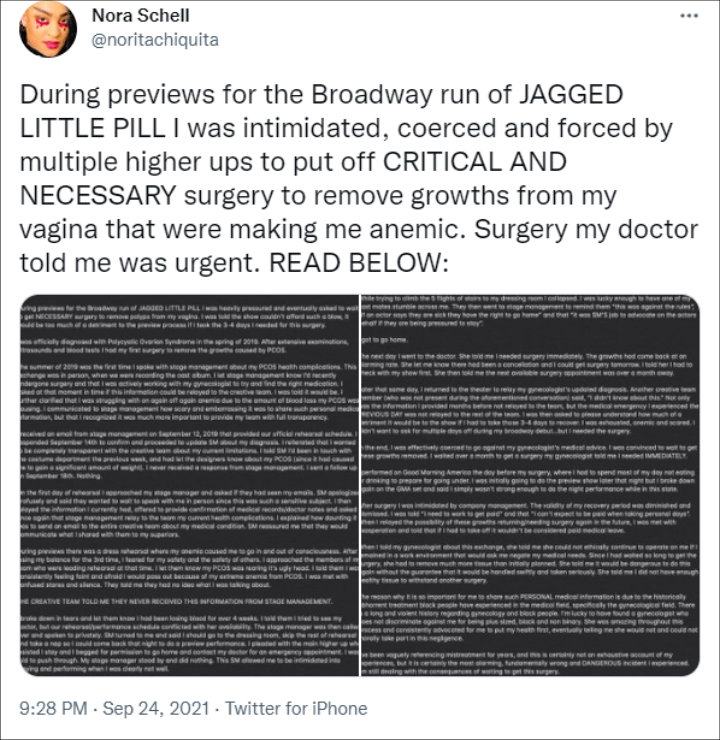 The officials have hired Jay Hewlin and The Hewlin Group, a consulting firm that specializes in diversity, inclusion, and employment law, to further investigate Schell's allegations.

The producers insist they and the industry experts will "conduct a comprehensive investigation of this incident and the individuals involved, and we are immediately launching an external review of all our policies and procedures with the well-being of all our employees in mind."

Another former cast member, Tony-nominated Celia Rose Gooding, shared her own statement to Deadline on Saturday, in which she seemingly revealed she will not return to the production when it reopens on Broadway next month (October 21).

Her return already seemed in doubt as "Star Trek: Strange New Worlds" producers announced in March the actress had been cast to play Uhura, the role originally played by Nichelle Nichols, in the CBS "Star Trek" prequel series, which is due to debut in 2022.

Gooding wrote that she "cannot ignore the harm Jagged [Little Pill] has done to the trans and non-binary community, including cast members on stage, off stage, and behind the scenes in the production making process..."

"I believe it will be in my best personal interest to focus more on work that I can align myself with emotionally and morally, just as Frankie would."

The musical, which features the songs of Alanis Morissette and an original story by Diablo Cody, is nominated for 15 Tonys at Sunday's award show. Six members of the cast, including Gooding, are also up for awards at the ceremony.

Gooding has also confirmed she will perform with the cast during the awards show, marking her final performance in the role. 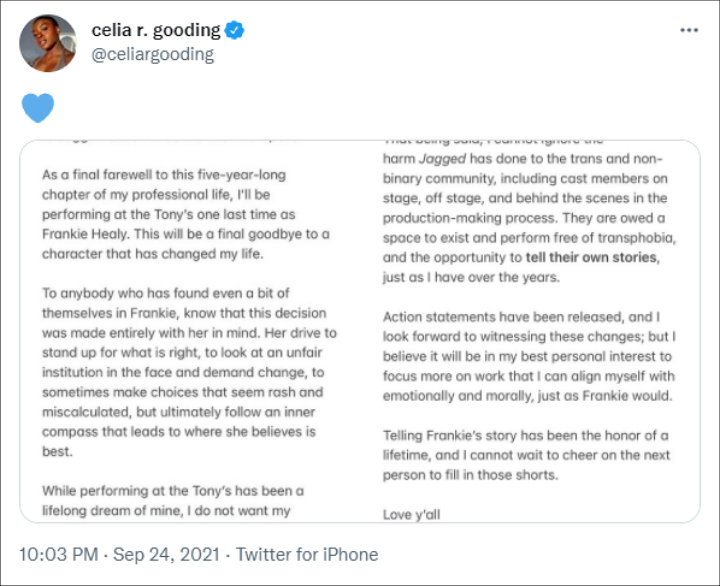 Celia Rose Gooding also spoke out against the Broadway musical.

The production previously came under fire from members of the trans and non-binary communities for switching the musical's character Jo - played by Tony nominee Lauren Patten - from a non-binary character to a gay female character.

The "Jagged Little Pill" musical's producers apologised for the revision earlier this month (September 2021) and pledged to take steps to address future casting procedures and cultivate an "equitable working culture". 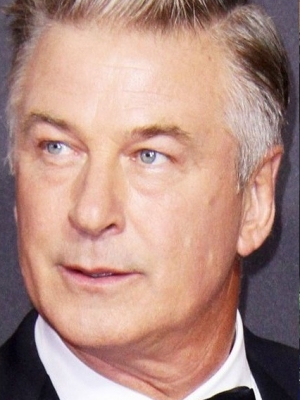