The 'Will and Grace' alum believes that the former 'Keeping Up with the Kardashian' star is not a perfect fit for the 'SNL' hosting gig because she is not a 'performer.'

AceShowbiz - Debra Messing was left confused after "Saturday Night Live" announced its first four hosts for season 47. After seeing Kim Kardashian's name on the list, the actress portraying Grace Adler on "Will & Grace" questioned, "Why Kim?"

The 53-year-old offered her two cents via Twitter Wednesday, September 22. "Why Kim Kardashian?" she first asked alongside an article about the news. "I mean, I know she is a cultural icon, but SNL has hosts, generally, who are performers who are there to promote a film, TV show, or album launch. Am I missing something?" 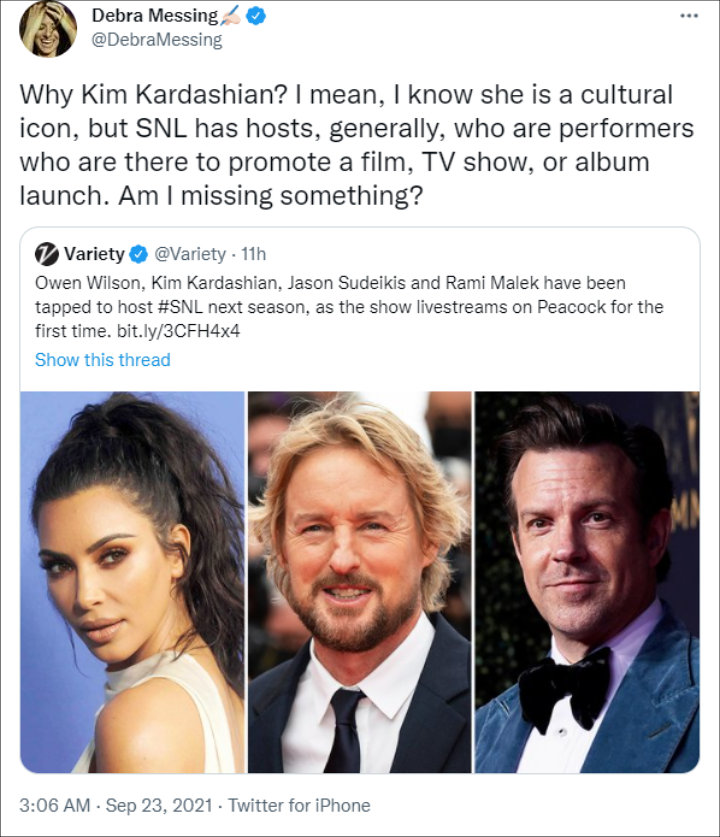 Debra's followers were also wondering about the same thing. "HAHAHAHAHA !!!! I had the same exact question as soon as I saw that and I still have no answer. I'm sure Kanye will be involved somehow. I'm not sure I want to waste my time with that episode," one person replied, before another added, "I don't get it either."

While some people were not pleased with Kim's upcoming appearance on the long-running comedy sketch show, the former "Keeping Up with the Kardashians" star took to her Twitter account to celebrate it. "OMFG no turning back now!!!! LOL," she exclaimed. "I'm hosting SNL!!!!!!"

Kim will host the new season of "SNL" on October 9 with Halsey joining her as musical guest. As for the October 2 premiere, it will be hosted by Owen Wilson while Kacey Musgraves is set to perform.

Meanwhile, Rami Malek and rapper Young Thug will make their "SNL" debut on October 16. Former writer and cast member Jason Sudeikis closes out the month on October 23 along with Grammy nominee Brandi Carlile.

The cast members who will return for the upcoming run remain unknown. However, Pete Davidson, Kate McKinnon, Kenan Thompson, Cecily Strong and Aidy Bryant sparked exit rumors in the season 46 finale back in May.

Moneybagg Yo Spoiled With $1.5M and Nearly 30 Acres of Land on His 30th Birthday