The 'Dark Phoenix' star and the Poe Dameron of 'Star Wars' sequel trilogy bring their onscreen chemistry to the red carpet when attending the 'Scenes from a Marriage' premiere.

AceShowbiz - Jessica Chastain and Oscar Isaac set the pulse racing with their intimate display at the Venice Film Festival. Having worked together for 2014's "A Most Violent Year" before starring together on "Scenes From a Marriage", the two actors showed their onscreen chemistry at the premiere of their upcoming HBO miniseries.

Chastain and Isaac, who play a couple on the drama miniseries, heated up the red carpet on Saturday, September 4 with their sensual gestures. Posing for the cameras, the two had their arms wrapped around each other in front of paparazzi. 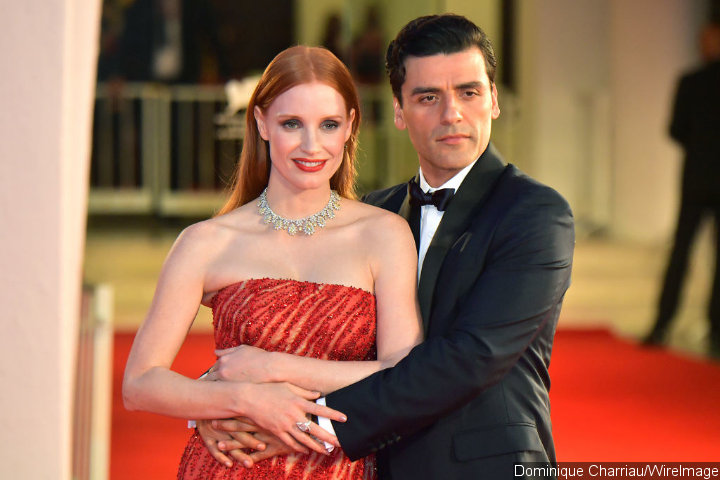 At another point during the photo session, the Oscar-nominated actress put her hands on her co-star's face as he smiled and put his hand on her back. Seemingly adoring her, the "X-Men: Apocalypse" star also stroked her bicep and kissed it as she rested her hand on her shoulder. After Chastain gently pushed him away, looking flustered while letting out a laugh, he did a chef's kiss gesture.

For the event, Chastain looked ravishing in a strapless red Atelier Versace gown with a diamond necklace. Her long red hair was let loose as she also sported her signature red lipstick. As for Isaac, he looked sharp in a classic black tuxedo and bow tie by Prada.

Their loved-up display at the film festival have left social media users flustered. "I wish I had words for this but I really do not," film critic Christina Newland tweeted along with a clip of the pair on the red carpet. Another remarked, "Now wait. Oscar Isaac and Jessica Chastain are married to other people???"

Chastain and Isaac, who have been friends since their Julliard says, recently talked to AP about filming sex scene for "Scenes From a Marriage", a remake of Ingmar Bergman's classic of the same title. "I would still get embarrassed, so bourbon helped a lot," Chastain said, giggling. "But the level of trust was high." Echoing the sentiment, Isaac said their close friendship posed "its own challenges" when filming such an inherently fraught project since "you care about the person so much."