The former WCW wrestler has been found dead inside her Georgia home just a day after posting suicidal clip in which she appeared to be issuing her last words while holding a small handgun.

AceShowbiz - Daffney Unger has passed away. The former professional wrestler for WCW was found dead just a day after she posted tearful and disturbing video on her social media platform. She was 46 years old.

Confirming her death was a spokesperson for the Gwinnett County Medical Examiner's Office, noting that her body was found inside her home in Georgia early on Thursday, September 2. The spokesperson said an examination has been conducted and that the office cannot release the cause and manner of the star's death at this time.

Daffney, who battled brain injuries, could be heard in the footage saying that she didn't want to do anything to hurt her brain as she wanted it to be examined. She stated, "Remember, my brain goes to Boston."

Following her death, her friend and fellow wrestler Lexie Fyfe told the outlet that Daffney, whose real name is Shannon Spruill, had been battling mental health issues in recent weeks. Lexie also mentioned that the authorities were called following Daffney's Instagram Live video. However, the cops had trouble finding her as she had just moved into a different apartment a few days ago.

Mourning her death was WWE star Mick Foley, who had expressed concern on Twitter over her well-being. Taking to his Twitter account, he wrote, "I'm so very sorry to learn of Daffney's passing. A terrible loss for her family, friends and wrestling. She was far ahead if her time in our business. #RIPDaffney. If you're hurting and thinking of doing harm to yourself, please know that help is available. 800-273-8255." 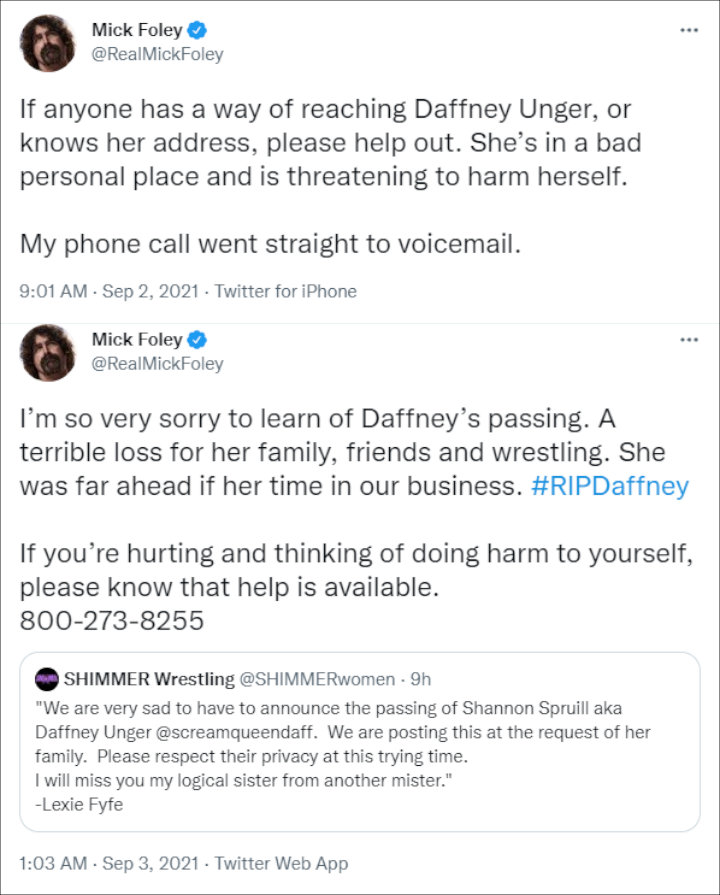 Mick Foley mourned over the tragic death of Daffney Unger.

Previously, Mick admitted he had been trying to contact Daffney before her tragic death. "If anyone has a way of reaching Daffney Unger, or knows her address, please help out. She's in a bad personal place and is threatening to harm herself. My phone call went straight to voicemail," he penned.