After his properties were damaged in the hurricane, the former star of 'The Dukes of Hazzard' asks his fans and followers to help him by going to his studio store and buying merchandise.

AceShowbiz - John Schneider is one of the people affected by Hurricane Ida in Louisiana. After his production studio got hit by the natural disaster, the former star of "The Dukes of Hazzard" asked for help.

"Hey, Schneider here. I don't have cell service here and I just drove about five or six miles down the road as far as I could go to try to find cell service and I don't have it," the 61-year-old actor began in a video obtained by TMZ. "My request is if you know somebody that's going through something like this, help them go out. Help them. But, if you don't, I'd very much like you to help us by going to the store, johnscheniderstudios.com."

John added, "Get you a movie, get your hat, get you something and I would very much appreciate it." The "Smallville" actor went on to highlight, "We are independent filmmakers, independent thinkers and we are also free."

"We're gonna get out of this," John assured the viewers. "The Haves and the Have Nots" alum then concluded his video, "But right now, we actually do need your help. It can help best by buying something from johnschneiderstudios.com and renting a movie. Thank you."

According to his representative, John "is doing fine" despite his home and studio being hit by the storm on Sunday, August 29. Though the extent of the damage is not yet known, a friend sent an image of his studio from the road via Twitter.

In the photo, trees had been uprooted and lay atop the studio, while it appears that a car, which was previously elevated above the studio prior to the hurricane, was surrounded by the tree. John then responded to the picture as saying, "Thanks Brian. We are headed back and seem to be the only ones on the road." 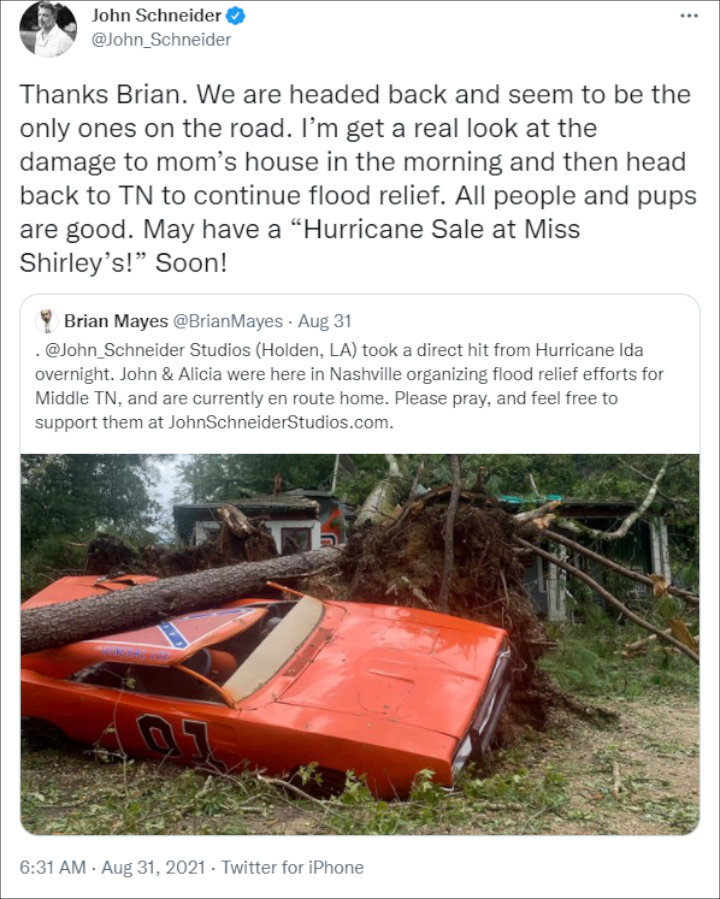 John Schneider responded to picture of his damaged studio.

"I'm get a real look at the damage to mom's house in the morning and then head back to TN to continue flood relief. All people and pups are good," John added. He then joked, "May have a 'Hurricane Sale at Miss Shirley's!' Soon!"