Khloe Kardashian Is 'Perfectly Fine' After Venting About 'Debilitating Migraines'

In a candid confession on her Twitter page, the Good American founder shares it feels 'torturous and indescribable' as she's forced to push back a meeting due to her migraine.

AceShowbiz - Khloe Kardashian has had a hard time because of migraine. Having shared her struggles with the severe headache, the reality TV star has expressed her frustration with the pain that left her temporarily debilitated.

Making use of her Twitter account, the 37-year-old shared how "torturous" migraine could be. "I wish people understood how debilitating migraines can be," she first lamented on Monday, August 9. "I get so frustrated when people tell me to push through and it's just a bad headache. if only they knew!! That feeling is torturous and indescribable. I can't believe I left home without my migraine medication."

When someone showed her sympathy toward Khloe, the mother of one replied, "I feel perfectly fine now. Thank you. I took my medication and I'm good to go. I have something at frustrated with people diminishing someone else's pain. Thank you."

She went on assuring another fan, whose aunt has also suffered from migraines. "I feel totally fine now. Thank you," Khloe wrote back. "I could never think about being on my phone if I was in the middle of a migraine episode. Oh my goodness I feel terrible for your aunt! I'm saying some major prayers for her."

"I am totally fine now," she reiterated. "There's no way I could be on my phone if I was still experiencing my migraine." Explaining her frustration, the Good American founder said, "I was simply venting because I had to push back a meeting due to my migraine. when I apologized and explained why I couldn't make it earlier, everyone sort of rolled their eyes." 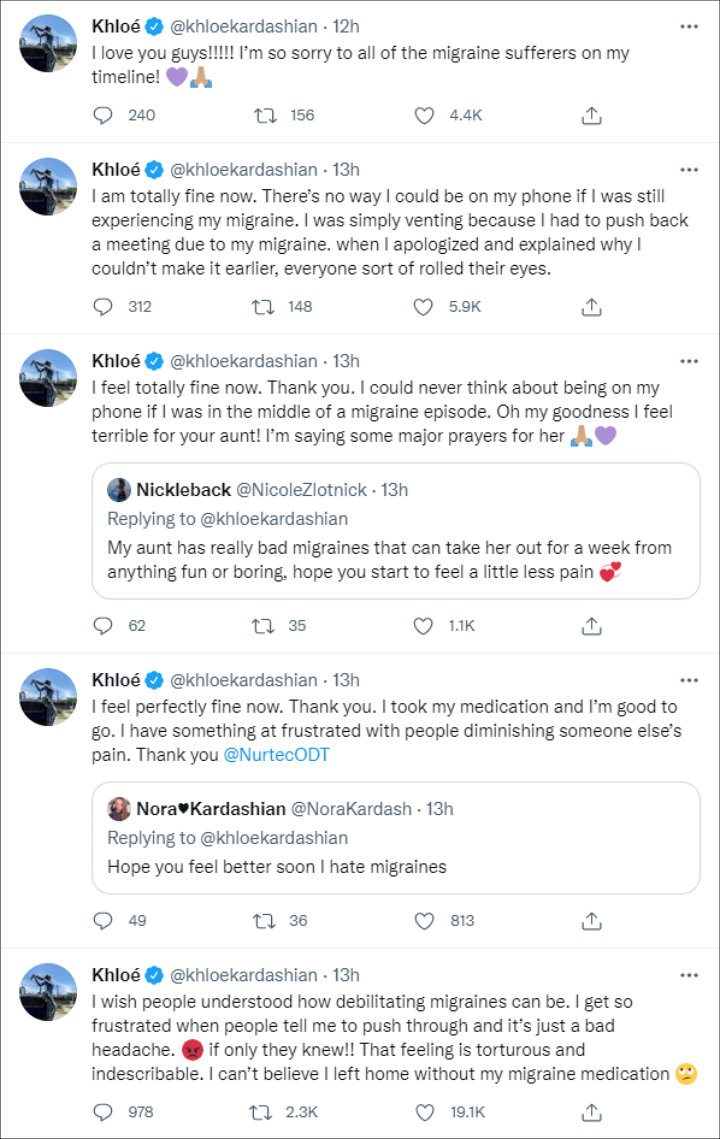 Khloe Kardashian opened up on her struggles with migraines.

In her last post addressing her migraines, she sent love to all her fans and those who have the same issue. "I love you guys!!!!! I'm so sorry to all of the migraine sufferers on my timeline!" she wrote.

Kanye West Allegedly Living in Another Stadium to Finish 'Donda'