The 27-year-old diver, who won his first-ever Olympic gold medal at the 2020 Games, responds to the talked-about picture of himself knitting during the women's 3m springboard.

AceShowbiz - Tom Daley was making a doggy sweater in the viral photo of him knitting in the stands at the Olympics.

After the 27-year-old diver won his first-ever Olympic gold medal in the men's synchronised 10m platform at the Tokyo 2020 Olympic Games last week (ends August 1), he got out his needles and wool to make a sports-themed "cosy" to protect his award.

And during the women's 3m springboard final at the weekend, Tom was knitting a jumper for the internet-famous pooch Izzy The Frenchie.

Responding to the viral snap with a picture of what he was making, he wrote on his Instagram Story on his page Made With Love By Tom Daley, "For those asking what I'm making here ... I am making a dog jumper for @izzythe.frenchie."

He later shared the finished piece with his followers.

In a previous video shared on the Instagram account - which is dedicated to his knitting and crochet projects - Tom said of the medal protector he made, "I don't normally post things not necessarily knitting related on my Made with Love page but myself and Matty won the Olympics and I thought I'd come on and say the one thing that has kept me sane in this whole process is my love for knitting and crochet and all things stitching, so I wanted to say thank you for my followers on here for following along."

"But not only that, this morning I made a little cosy for my medal to stop it getting scratched, so here it is."

Tom showed off the double-sided design and demonstrated how the medal and its ribbon tucked into the cosy.

"It's got a Union Jack on one side and a Japanese flag on the other and it all tucks in nicely for me to have a little pouch and carry around my medal without it getting scratched," he continued. 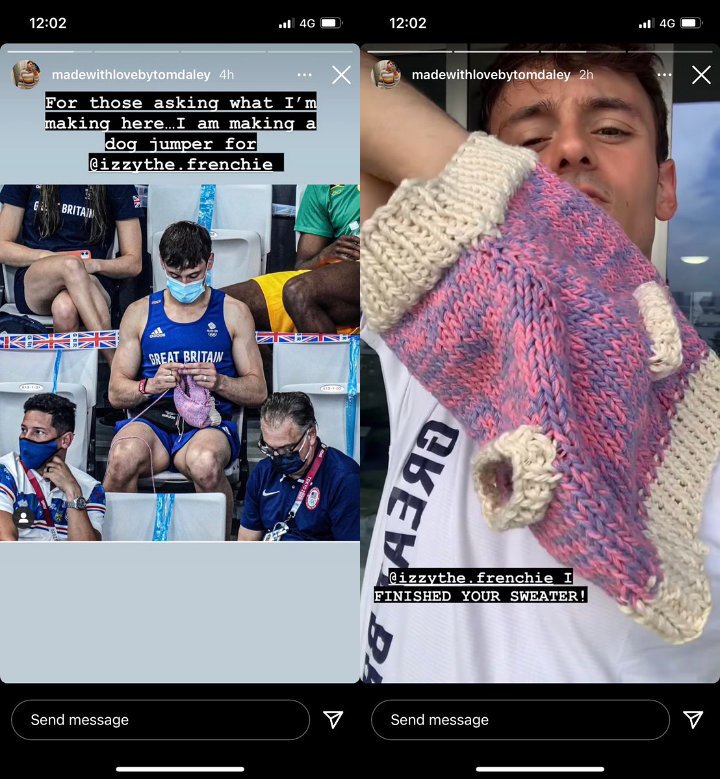 The sportsman - who has three-year-old son Robbie with husband Dustin Lance Black - admitted ahead of the Games that he'd be keeping busy during his downtime at the event with his crafty hobby.

"I have lots of things to keep me occupied, like my obsession with knitting and crochet," he said. "I'm planning on bringing a whole extra suitcase of yarn because I'm not going to be allowed out of the village to go to the shops. I want to make sure I'm well stocked."

Tom Daley Shows Off His Own Knitted Olympic Cardigan