The 'Rockstar' hitmaker, who worked with the English singer on her 'Levitating' remix, apparently agrees with a fan who suggests that her song becomes a hit because he's featured on it.

AceShowbiz - DaBaby appeared to diss Dua Lipa for calling him out over his recent homophobic remarks. The "Rockstar" hitmaker, who worked with the English singer on her "Levitating" remix, was caught liking several tweets about hating her.

The MC threw his subtle dig at his former collaborator on Wednesday, July 28. Among the tweets that he liked read, "It's funny how @DUALIPA song levitating is only number 1 because @DaBabyDaBaby is on it. You're welcome. Because I deada** only heard of you because of Dababy."

DaBaby also liked a post from someone that sarcastically asked, "Patiently waiting for @DUALIPA to pull her song with @DaBabyDaBaby off streaming services." A third individual echoed, "@DUALIPA soooo when you gonna remove that remix with @DaBabyDaBaby ?! We waiting..." 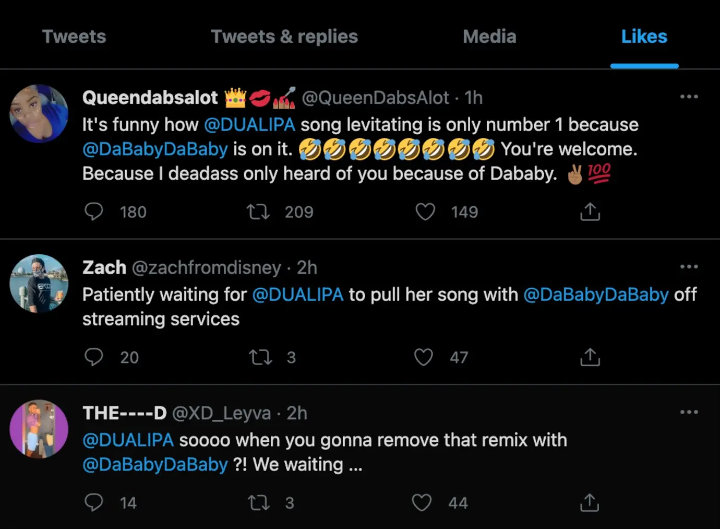 The shading came after Dua condemned his offensive comments about the LGBTQ+ community during his Rolling Loud performance. "If you didn't show up today with HIV, AIDS, or any of them deadly sexually transmitted diseases, that'll make you die in two to three weeks, then put your cellphone lighter up... Fellas, if you ain't sucking d**k in the parking lot, put your cellphone lighter up," he shouted on Sunday, July 25.

Dua, who has been urged to remove DaBaby from her hit song in the wake of the controversy, weighed in on his statements on Tuesday via Instagram Story. "I'm surprised and horrified at DaBaby's comments. I really don't recognize this as the person I worked with. I know my fans know where my heart lies and that I stand 100% with the LGBTQ community. We need to come together to fight the stigma and ignorance around HIV/AIDS," she pointed out.

The "Suge" spitter, however, has issued his apology to AIDS/HIV survivors but remained defiant about his homophobic rant. "Anybody who done ever been effected by AIDS/HIV y'all got the right to be upset, what I said was insensitive even though I have no intentions on offending anybody. So my apologies," he first stated.

"But the LGBT community... I ain't trippin on y'all, do you. y'all business is y'all business," the 29-year-old went on, before adding in a follow-up tweet, "[and] for any brands, networks, or artists that like to profit off of black rappers influence on the culture, without understanding it or having the patience to deal with what comes with the position we play in our culture. Keep yo money next time." He then pointed out, "Us 'N***AS' human too. #GodBless."