During a Q&A session, the daughter of 'The Real Housewives of Atlanta' alum gets candid that she does 'a lot of cardio' by running '3-5 miles a day' with her waist trainer.

AceShowbiz - Kim Zolciak's daughter Ariana Biermann has addressed her drastic transformation. During an Instagram Q&A session, the younger daughter of the "Don't Be Tardy..." star shut down tummy tuck speculation by declaring that she just worked her "a** off."

On Saturday, July 3, the 19-year-old beauty spoke candidly about her appearance during an "ask me anything" session on Instagram. Being asked by a user about her possibly getting liposuction or tummy tuck, the daughter of former "The Real Housewives of Atlanta" star responded with a selfie in which she wore a leopard print string bikini that showcased her flat physique, "Nope just worked my a** off." 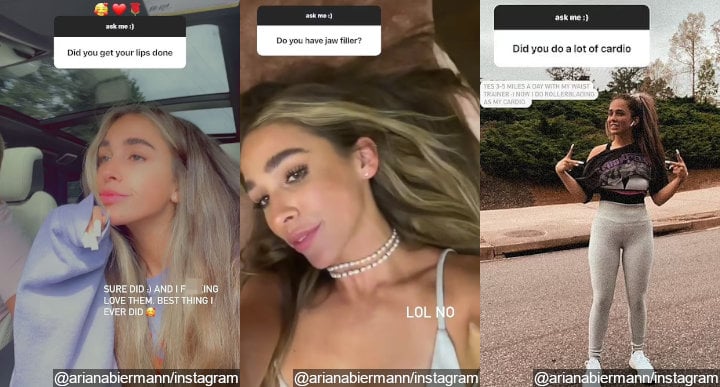 "What was your highest weight and what you weigh now?" another question read. Ariana replied, "Highest - 167. Now - 118 [love]," along with a mirror selfie that saw her toned body in an animal patterned bikini. In the next snap, she admitted that she did "a lot of cardio." She wrote, "3-5 miles a day with my waist trainer :) Now I do rollerblading as my cardio."

In the following Story, another Instagram account questioned, "Did you get your lips done?" Ariana went on to share a car selfie in which she showed off her pink, pouty lips on full display. "Sure did :) and I f**king love them," she admitted. She then gushed, "Best thing I ever did [love]." The teenager was also asked about getting jaw filler. "Do you have jaw filler?" one of her followers asked. She confessed, "Lol no," along with a video that saw her beautiful jawline.

Ariana is Brielle Biermann's younger sister, who has also been the subject of cosmetic surgery claims. In May, the 24-year-old called out critics of her ever-changing look during her appearance on "Watch What Happens Live with Andy Cohen".

Denying that she's ever had plastic surgery, Brielle credited her age for her different look. "They don't realize that you look different when you're 10 years old to 24. I hope I look f**king different, alright," she said while discussing getting older in the conversation.