In his clapback, the 'Project Runway' star hopes that the 'Bleeding Love' singer speaks to him 'directly' instead of sharing her story via social media, especially when he is at his 'most vulnerable moment.'

AceShowbiz - Michael Costello has been forced to defend himself over bullying accusations. Finding himself being called out publicly by Leona Lewis for "humiliating" her prior to a 2014 charity fashion show, the "Project Runway" star set aside time to fire back at her claims.

"I was really surprised to hear about your traumatic experience with me from the 'Go Red Women' charity event in 2014," the fashion designer, who claimed that he had reached Leona privately, began his lengthy Instagram Story note on Tuesday, June 15. "I flew to New York just to fit you, and we had a wonderful time at the fitting."

Michael added, "We took photos and I left options of dresses for you with the charity." He went on to note that Leona still wore his dress even after the 2014 event. "Your team has continuously reached out to me to pull custom looks on for you, which I was happy to create," he revealed. "The most recent request I received from you was May 17, 2021."

The 38-year-old designer, who spoke out about having suicidal thoughts after being bullied by Chrissy Teigen years ago, further pointed out in his note, "I don't take accusations of body shaming lightly, as I have build career as celebrating diverse women of all shapes and sizes." He then stressed that he has "lost tons of opportunities, sleepless nights, and [he's] not in a good mental state of mind."

"I wish you spoke to me directly instead of on Instagram, especially when I am at my most vulnerable moment. After years of trauma and getting blacklisted with receipts shown to me by my friends and allies, I have been suicidal and often feel no purpose to live," he added. "But if I did unintentionally hurt you, and you continued to support me, I want to apologize to you directly." 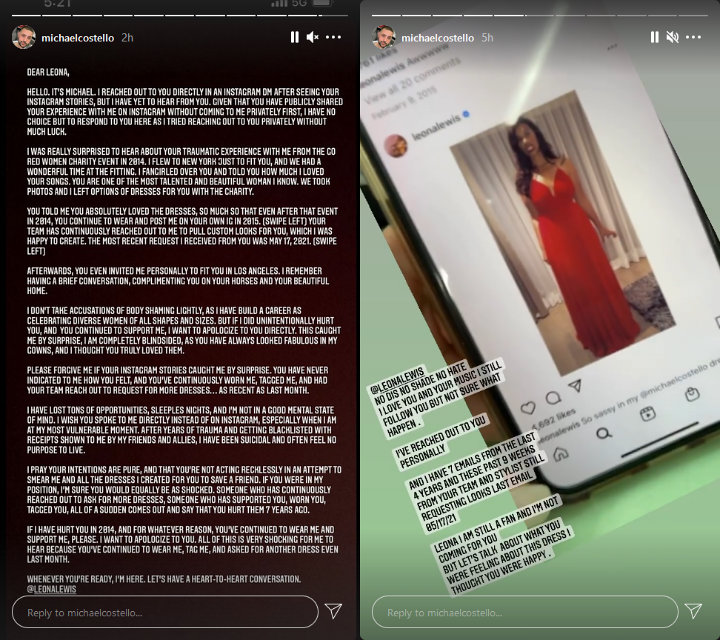 Michael concluded his post with an invitation to Leona. "Whenever you're ready, I'm here," he wrote. "Let's have a heart-to-heart conversation. @leonalewis."

Michael's statement came hours after Leona shared a series of Instagram Stories. "I usually don't speak on subjects like this. But honestly I feel that I have to say something as I've dealt with years of insecurity from it," she spilled in the Stories. "I don't condone any kind of bully behavior and I'm sorry for what Michael Costello went through. I wanted to share my experience in 2014." 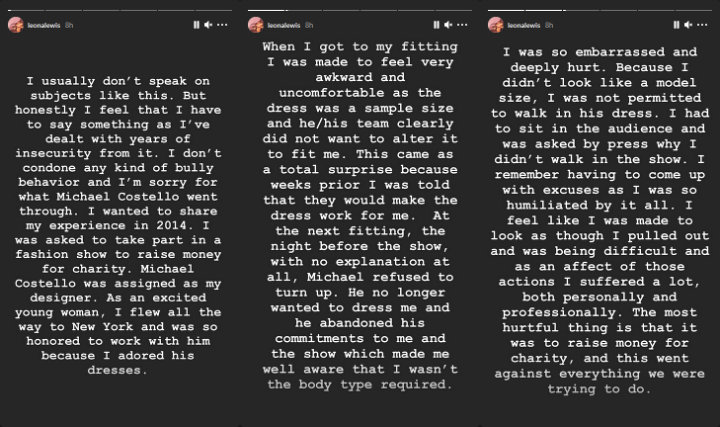 Leona Lewis accused Michael of bullying prior to her 2014 fashion show.

"When I got to my fitting I was made to feel very awkward and uncomfortable as the dress was a sample size and he/his team clearly did not want to alter it to fit me," the 36-year-old singer recounted, before alleging that "Michael refused to turn up" at the next fitting. She claimed to be "so embarrassed and deeply hurt." Blaming on the sizing issues, she added, "I had to sit in the audience and was asked by press why I didn't walk in the show. I remember having to come up with excuses as I was so humiliated by it all." 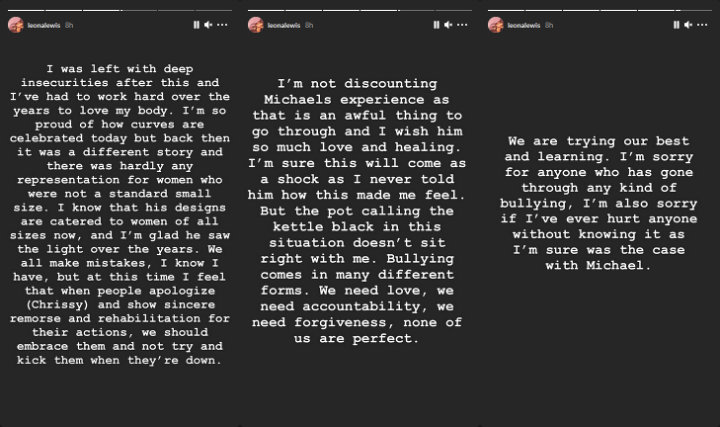 Leona Lewis pointed out that she was 'humiliated.'

On Tuesday, Michael's mom Nancy Costello also shared her thoughts on how Chrissy's bullying affected her son to Fox News. "It terrified me," she referred to the fashion designer's post about his suicidal thoughts on Monday, June 14. "The damage is done. [Chrissy] never knew that Michael would post those text messages. It would have meant a lot to Michael if him, his collaborators and supporters would have heard her speak his name. Maybe now she will do something right."

Nancy added that Chrissy alleged "cruel and evil" mistreatment of her son left her worried that he would harm himself. "I feared that Michael would take his life because the fashion industry is his life," she said. "If he loses that he feels he has nothing to live for."