The Canadian actress, who played Elena Gilbert on the hit CW supernatural drama series, delights her fans and followers with her 'surprise Sunday funday' hangout with the Bonnie Bennet depicter.

AceShowbiz - Nina Dobrev has sent "The Vampire Diaries" fans into a frenzy. The actress, who played Elena Gilbert on the supernatural drama series, succeeded to "break the internet" after having a surprise reunion with Katerina Graham years after the series' final season.

Taking to her Instagram Stories on Sunday, June 13, the 32-year-old actress posted a video of her and Kat while the two hung out. In the short clip, she went on to tease her followers, saying, "So I was sitting here on a Sunday, just chilling, and I thought to myself, 'Can I break the internet?' " The clip was captioned, "Surprise Sunday Funday." 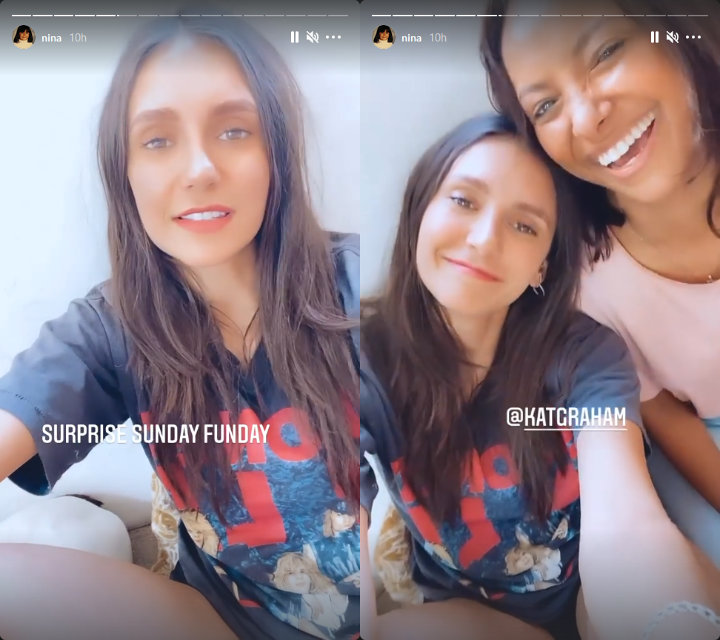 "And then I thought, 'Yes, I think I can break the internet,' " Nina continued, before revealing that Kat was sitting beside her the whole time. She then said and laughed with her co-star, "Consider yourself broken, internet."

Kat then sweetly kissed Nina on her forehead and quipped, "I love you so much." The CW stars appeared to be having a low-key hangout, as they both opted to dress casually for the outing. Nina could be seen wearing a graphic T-shirt and shorts, while Kat donned a blush-colored shirt and denim pants.

Continuing to delight her followers, Nina took to her Instagram feed to share a sweet selfie with Kat. The photo was simply captioned with a red heart emoji. The 31-year-old Bonnie Bennet depicter on "The Vampire Diaries" responded to the sweet post by writing, "I love you sooooooo much," which prompted the "Degrassi: The Next Generation" alum to reply with some heart emojis.

As Nina predicted earlier, she really did "break the internet." In the comment section, many of her fans gushed over her surprise reunion with Kat. "YOU REALLY DID BREAK THE INTERNET NINA," one fan exclaimed, with another replying, "THE BEST DUO IS BACK IM LIVING." The third follower chimed in, "THE REUNION WE DIDNT KNOW WE NEEDED." A different Instagram user also commented, "IM CRYING OMF YES IVE BEEN WAITING TOO LONG FOR THIS."

Nina and Kat last appeared on "The Vampire Diaries" together in the final season of the hit CW series, which aired in 2017.