Before Lauren Burnham gives birth to their baby boy and girl, the season 22 star of 'The Bachelor' praised his wife as a 'tough woman' despite her having a hard time with 'nausea.'

AceShowbiz - Arie Luyendyk Jr. and Lauren Burnham have welcomed their twins. Taking to his social media account, the season 22 star of "The Bachelor" went on to announce that his wife is "doing great" after "smoothly" giving birth to their babies.

"@luyendyktwins are here!" the 39-year-old father revealed in an Instagram Story post on Saturday, June 12. Offering more details, he added, "Momma and babies are doing great and everything went smoothly." The former reality TV star continued to express his gratitude in the snap, stating, "Spending time cherishing these moments, thank you for all the support [love]." 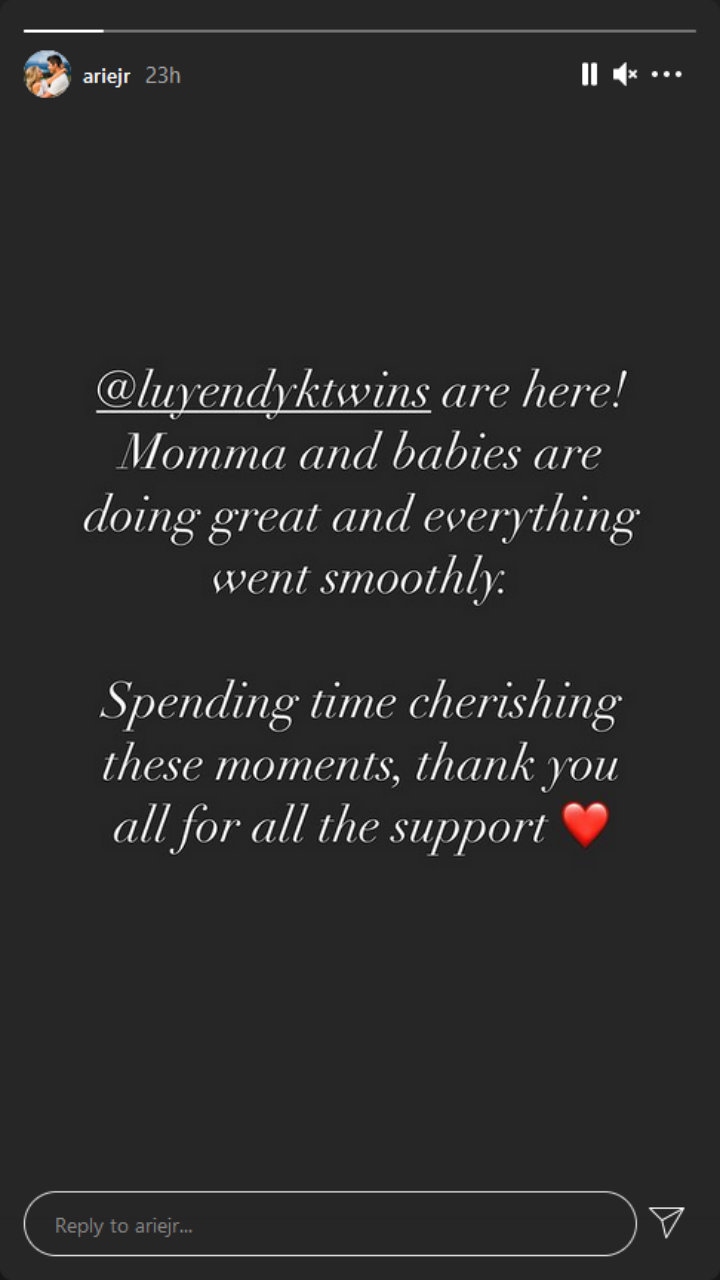 Despite the fact that both Arie and Lauren, who are also parents to their 2-year-old daughter Alessi, have yet to share any photos of their newborns, they did share a sweet snapshot of themselves taken at the hospital. The 29-year-old mom was also applauded by her husband for being a "tough woman" before her delivery, noting that "she's having a hard time this go around with nausea."

Arie and Lauren first shared that they were expecting "2 little miracles" back in December 2020, after she suffered a miscarriage in May the same year. At the time, the mother of three posted ultrasound pictures and declared, "We maaaay have left out one small detail @luyendyktwins." Her husband uploaded the same photos on his own page and noted, "2 little miracles. Love them with all my heart already @luyendyktwins."

Arie also announced Lauren's pregnancy through a video posted on their YouTube channel. In the clip, the now-father of three revealed, "We're pregnant! We've known for a while and we've been trying to hide it." His wife, who claimed that she has been "really sick," chimed in, "It's so hard to keep it a secret."

In the following month after their initial announcement that they were expecting twins, Arie opened up to the public that they would be having a boy and a girl at the same time. "How did we get so lucky?" the proud father wrote on an Instagram post, with his wife adding that they "couldn't be more excited!"