Kimberly Alexander, who has insisted that the Boston Celtics player is her baby daddy, shares a screenshot of her Instagram inbox showing the 'Keeping Up with the Kardashians' star's message preview.

AceShowbiz - Khloe Kardashian has apparently tried to contact a woman claiming Tristan Thompson fathered her child. A few weeks after the Boston Celtics player filed a default judgment against Kimberly Alexander, the "Keeping Up with the Kardashians" star was unveiled to have sent a direct message to her.

On Monday, May 31, Kimberly made use of Instagram to post a screenshot of her inbox that showed the Good American founder's alleged message preview. "Listen at this point I really wa...", so read the text.

The message featured Khloe's current Instagram profile picture with a verified logo next to it. The screenshot indicated that it was snapped at 9:19 and that the reality star sent the message around 11 minutes prior. The text was bolded and had a blue dot next to it, meaning that it had not yet been read. 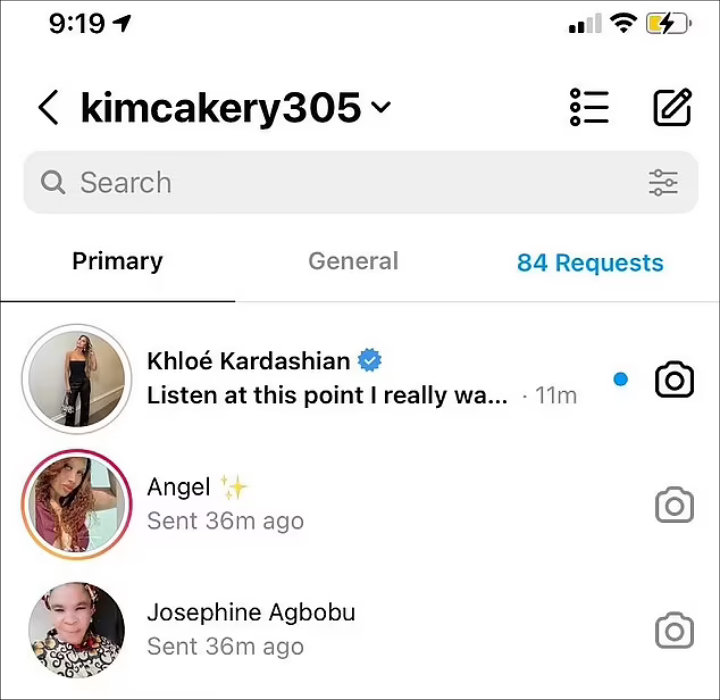 This came more than a week after Tristan's default judgment against Kimberly got denied due to a few "issues" that needed to be corrected. TMZ previously reported that he wanted the judge to hit her with $100,000 in damage plus additional costs after companies and brands have viewed him "as a troubled athlete" because of her claims.

Filing the default judgment was the second approach that Tristan took to challenge Kimberly's claims. Back in May 2020, he filed a libel lawsuit against her. He also insisted to have taken a paternity test, which proved that he is not the father of her child. In the lawsuit, it was noted, "A reputable, accredited DNA lab approved by her own lawyers has conclusively determined that Thompson is not the father of Alexander's child."

While it is unclear whether Tristan is actually Kimberly's baby daddy, he allegedly admitted that he had sex one time with her around 2011/2012, years before the birth of her son and long before he was dating the daughter of Kris Jenner. Kimberly, however, shut down his claims and has blown off the lawsuit for over a year.