In some pictures featuring the award-winning actress as the American civil servant, Sarah is wearing a white top that she pairs with brown fat pantsuit.

AceShowbiz - Several set photos from "Impeachment: American Crime Story" have found their way out online and it offered the first look at Sarah Paulson as Linda Tripp, who infamously tapped calls she had with Monica Lewinsky about the latter's affair with Bill Clinton. In the new pictures, which circulated on Thursday, April 29, Sarah was unrecognizable as she donned a blonde wig and a fatsuit.

In the pictures, the award-winning actress wore a white top that she paired with a brown pantsuit that looked identical with the ones that real-life Linda wore during one occasion. Completing her look as the American civil servant, Sarah's Linda wore golden-framed sunglasses. 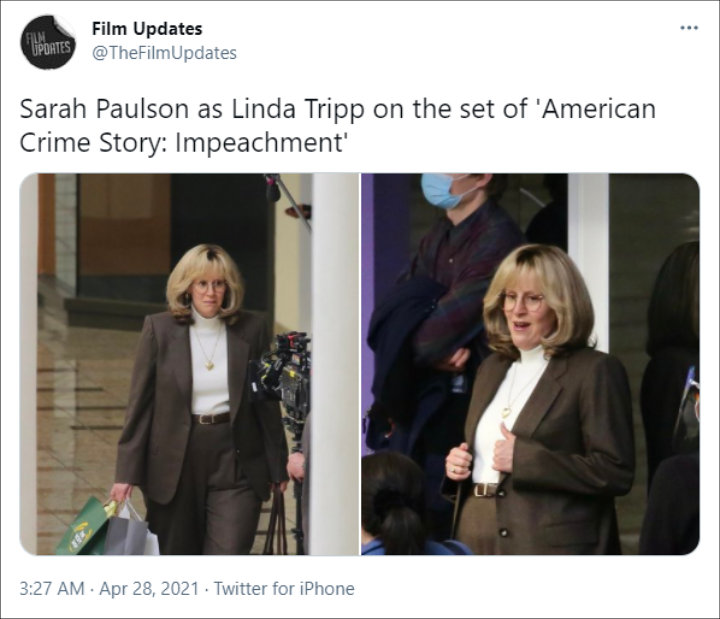 Some people praised how Sarah nailed the look as one said, "Woah I didn't realize that was Sarah Paulson for a minute there! The makeup here is phenomenal!" Another person wrote, "Sarah coming for that second American Crime Story awards sweep after playing Marcia Clark."

Kristin added, "I feel like so much has been said on why actors in fat suits are harmful on so MANY different levels but even at the very basic, surface level. This is one more fat person getting shut out."

"Sarah Paulson could have done a dozen different roles in this and would have slayed as she often does," one Twitter user said, adding, "There are so few opportunities for actors who aren't Hollywood's Preferred Physique & plenty of actors out there who could have killed this role without putting on a fat suit."

Based on former New Yorker writer Jeffrey Toobin's book "A Vast Conspiracy: The Real Story of the Sex Scandal That Nearly Brought Down a President", "Impeachment" is set to tackle the affair between Lewinsky and former president Bill in the late '90s that captivated the nation. The scandal ultimately led to the president's impeachment. After being impeached for not telling the truth about his affair with Lewinsky in December 1998, Bill was eventually acquitted by the senate in February 1999.