Singer/songwriter Richard Marx, screenwriter David Weissman and comedian Christopher Titus are among those who put the Fox Nation host on blast for assuming 'there will be peace' after black people have got their 'justice.'

AceShowbiz - Tomi Lahren couldn't care less about the latest outcome of Derek Chauvin trial in the murder of George Floyd. After the former police officer was found guilty on Tuesday, April 20, the conservative political commentator took to Twitter to offer her nonchalant response to the verdict.

"You got your justice so I'd assume there will be peace in Minneapolis tonight? No rioting? No looting? No harassing officers?" she tweeted, undermining the meaning of the protest. "Is the Foot Locker safe tonight? Should be, right? Justice, right? No need to steal in the name of George Floyd anymore, right?"

"And when I say 'your' justice I am referring to the groups who have been loudly declaring 'no justice, no peace' as an excuse to ravage communities," Tomi added in another tweet, noting, "Never said I disagreed with the verdict. Never said Chauvin wasn't wrong. Simply said you don't get a pass to anarchy because of it."

She continued voicing her displease with the BLM protest as writing, "I agree with the verdict of the trial. I don't agree and haven't ever agreed or given a pass to lawlessness in the name of George Floyd or anyone else. I also loudly condemned what happened on Jan 6th. I'm consistent. The Left isn't. BLM isn't."

Tomi further insisted that "what happened to George Floyd at the hands of Chauvin was WRONG but there is still NO evidence it had anything to do with race!" She argued, "Chauvin was found guilty on all counts in under a day. Any violence/rioting/looting that happens tonight can't be blamed on a racist justice system!" 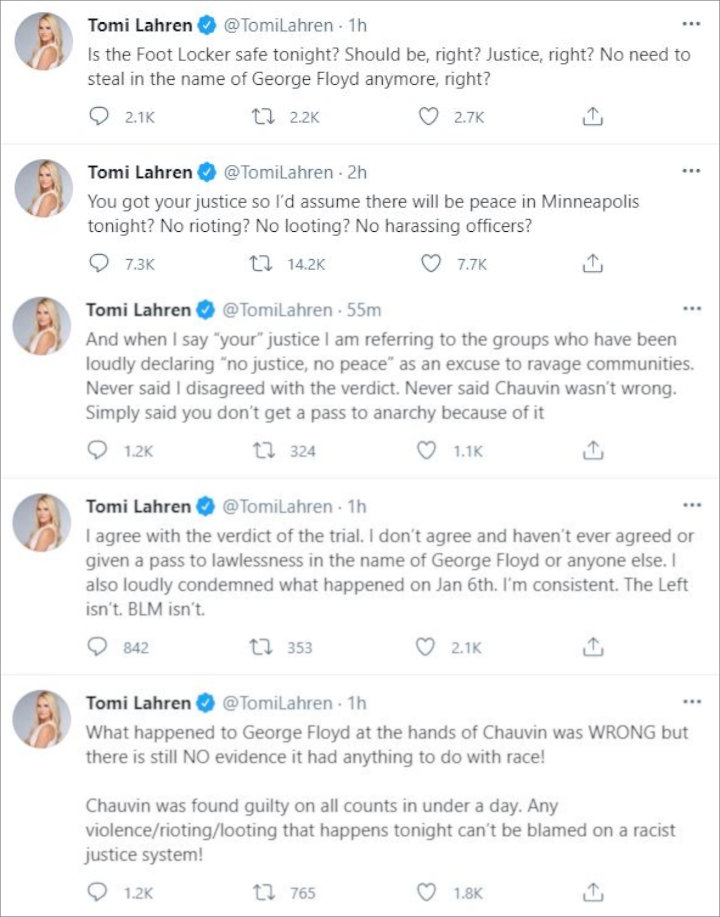 Needless to say, Tomi's tweets have earned her backlash from BLM supporters. Singer/songwriter Richard Marx called her racist xenophobe in his tweet that read, "One of the countless problems with racist xenophobes like this moron is that a black man, face down on the pavement with a knee on his neck, is precisely her idea of 'peace.' "

Screenwriter David Weissman said that Tomi's reaction only showed "the epitome of white privilege," while comedian Christopher Titus reminded the Fox Nation host. "My justice? It's just 'justice' you racist twazzle." He went on blasting the 28-year-old, "Did you think it was a good thing he murdered a man? Damn, I'll never get the brutality and heinous, callous, vile, hatred you spew Tammy, you really are a POS. Hey, but on @FOX, that pays the bills. Work it."

Tomi's comments on Derek's guilty verdict were not the only one that people found offensive. House speaker Nancy Pelosi has also come under fire for calling George Floyd's death a sacrifice for justice. 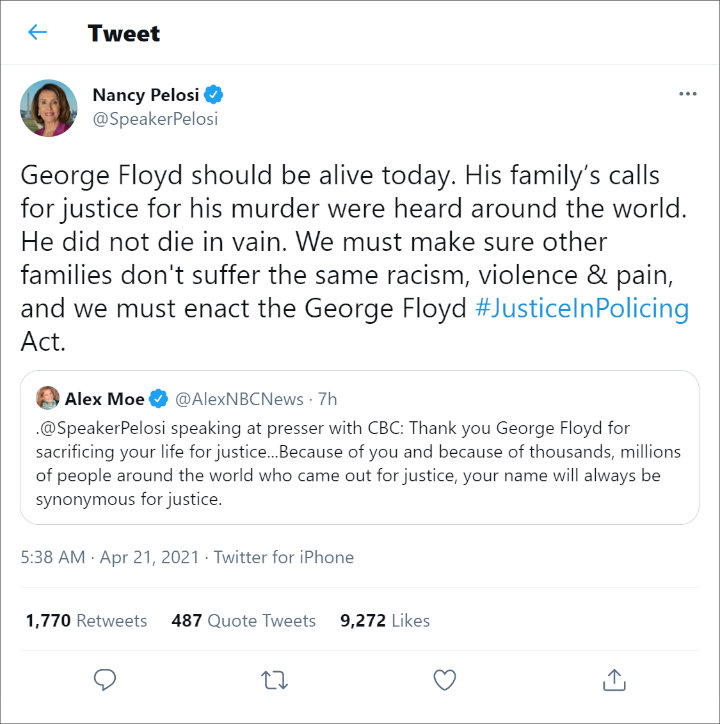 "Thank you, George Floyd, for sacrificing your life for justice. For being there to call out to your mom, how heartbreaking was that, call out for you mom, 'I can't breathe,' " the Democratic politician said at a press conference. "But because of you and because of thousands, millions of people around the world who came out for justice, your name will always be synonymous for justice."