The 'Shameless' star shoots his shot with the 'Truth Hurts' rapper after she poked fun at herself for sliding into the Captain America depicter's DM while she's drunk.

AceShowbiz - Lizzo's drunken DMs to Chris Evans have apparently caught Chet Hanks' attention. Following the Grammy Award-winning artist's confession of her embarrassing mishap, the actor/rapper has declared that he is open to taking her into his arms should things don't work out between her and the former MCU star.

The son of Tom Hanks and Rita Wilson took to his Instagram Story on Tuesday, April 20 to express his interest in the "Juice" raptress. Sharing a screenshot of Lizzo's TikTok video, the 30-year-old wrote, "[Lizzo] if it don't work out with Captain America, I'm here, baby," adding "WBS BQS," which stands for his song "White Boy Summer" and "Big Queen Summer." 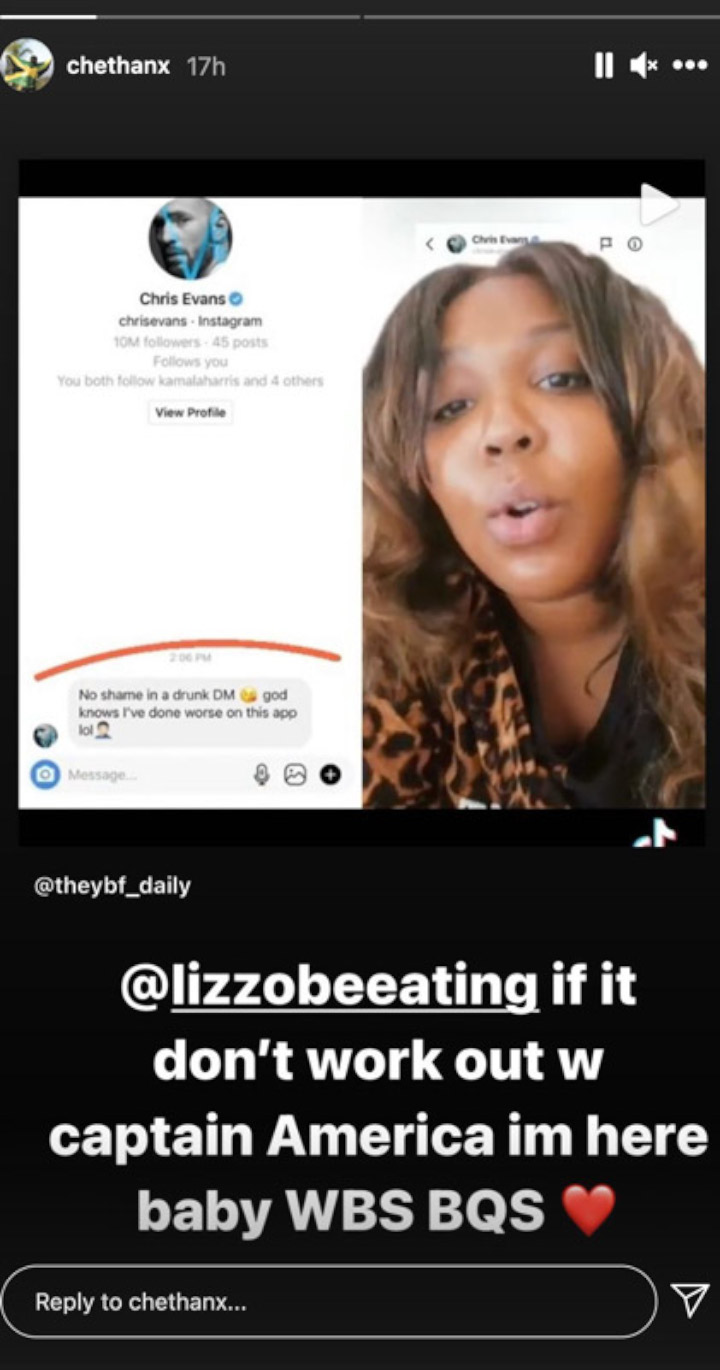 Chet's message to Lizzo comes on the heels of her confession that she drunkenly slid into Chris' DMs. After sending the Captain America depicter random emojis of a puff of wind, sports player and basketball, she reminded others in a TikTok video, "Don't drink and DM, kids." She went poking fun at herself in the caption, "For legal porpoises this is a joke."

"The reason I'm upset about this one is because I know I'm not going to be able to marry him and honestly it hurts me to the core," Lizzo mouthed audio voice from TikTok user Tatayanna Mitchell in the clip. "Because damn papa, he a rare breed, no comparing."

Being a good sport, Chris later responded to Lizzo's video by acknowledging his own Instagram mishap in the past. "No shame in a drunk DM [face-throwing-a-kiss emoji]," he wrote to the "Truth Hurts" hitmaker. "god knows I've done worse on this app lol [facepalm emoji]," he added, likely referring to the time he shared a video featuring his camera roll that included a photo of a penis.

Lizzo reacted to Chris' message in another video, in which she put her hand on her forehead. She also noted that the "Knives Out" star has followed her on Instagram. "B***H," she simply captioned the clip to express her excitement.

Lizzo has not responded to Chet's Story, but one of her latest Instagram posts will surely gain her more interest from her followers. The 32-year-old star shared her unedited naked selfie to welcome the "TAURUS SEASON."

"To celebrate I wanna give y'all this unedited selfie.. now normally I would fix my belly and smooth my skin but baby I wanted show u how I do it au natural," she wrote in the caption. "I am excited to be partnering with @dove and the #DoveSelfEsteemProject which is helping to reverse the negative effects of social media and changing the conversation about beauty standards. Let's get real y'all."