Fans believe that the 'Lollipop' hitmaker and the plus-size model have tied the knot after he declares on Twitter, 'Happiest man alive! Today is the beginning of our forever.'

AceShowbiz - Congratulations might be in order for Lil Wayne and Denise Bidot. The "Ain't Got Time" rapper, who has been dating the plus-size model on-and-off, teased fans that they have tied the knot by sharing a cryptic post on social media.

The 38-year-old MC, whose real name is Dwayne Michael Carter Jr., took to Twitter on Tuesday, April 20 to declare, "Happiest man alive!" He then added, "Today is the beginning of our forever. Forever?? Forever, ever?? FOREVER EVER!!!!! The Carters." 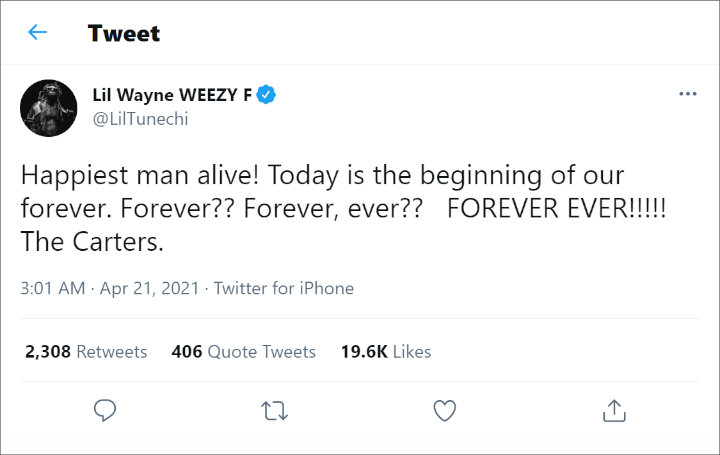 Lil Wayne hinted at a marriage to Denise Bidot.

Although Wayne did not explicitly mention that he got married, many of his followers believed he did so. One user replied, "Only you would get married on 4.20, what an absolute legend beyond happy for you both, wishing you both all the best years to come forever." Another raved, "Congrats Tunechi! Happy for you and yours! #ForeverCarters." A third echoed, "Congratulations on the marriage."

Wayne's post came nearly a week after he put out a romantic video of Bidot. In the clip, she was seen writing their names "Denise & Dwayne" on the sand before blowing a kiss to the camera. The footage was accompanied with his unreleased song, in which he spit, "Let's spell our names in the sand and draw a heart around it."

Wayne and Bidot went Instagram official in June 2020. In November the same year, however, they reportedly called it quits after he publicly voiced his support for former president Donald Trump. She unfollowed the Young Money founder on Instagram at that time and decided to deactivate her account.

Despite the split, the "Sucker for Pain" singer and the 34-year-old beauty reconciled as they celebrated New Year's Eve together. They posed together in the image shared on Instagram with fireworks lighting up the night sky in the background.

Days after the celebration, Wayne and Bidot sparked a breakup rumor yet again. On what led to the speculation, she appeared to throw shades at her beau via Instagram Story by writing, "Pretty disappointing when you defend someone throughout everything and they turn out being just as s**tty as everyone said they were."