The 'MONTERO (Call Me by Your Name)' hitmaker responds to the notion that the 'Where the Hood At?' rapper 'was a sacrifice' because he died on Lil Nas X's birthday.

AceShowbiz - Lil Nas X has found himself at the center of a wild conspiracy theory linking him to DMX's death. While family, friends and fans continue to mourn the death of the rap icon, a Twitter user appears to blame the "Old Town Road" hitmaker for the tragic passing of the 50-year-old star.

The online troll posted a screenshot of Lil Nas X's birthday from Google search, pointing out that it is the same date as DMX's death. "DMX was a sacrifice as he died on Lil Nas X bday," the person wrote along with the image. "No such thing as chance."

Catching wind of it, Lil Nas X has clapped back at the troll. "it genuinely scares me knowing how crazy you n***as are," he tweeted back to the said user on Monday, April 12. 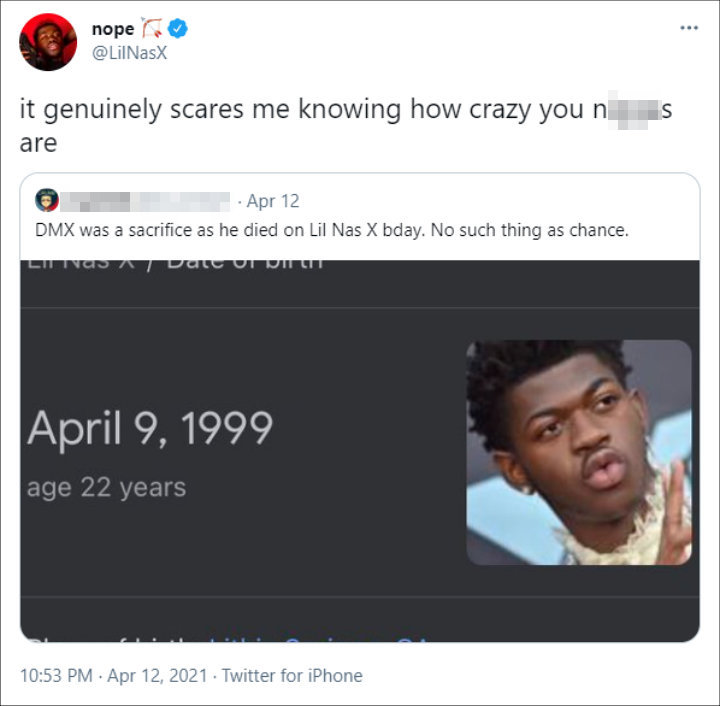 This is not the first time Lil Nas X has been mentioned alongside DMX. When news broke about the latter's heart attack and hospitalization, Sada Baby wished that it happened to the "MONTERO (Call Me by Your Name)" artist instead of the hip-hop veteran. "Lord we said Nas X, not DMX," Sada wrote at the time.

Responding to Sada's ill wish towards him, Lil Nas X tweeted, "this is so f**ked up omg," while using the chance to promote his latest single. "everyone stream the number 1 smash hit Montero (Call Me By Your Name) out now on all platforms!" he added.

Sada, who garnered backlash for his tweet about Lil Nas X, later issued an apology. "I said what I said in that post because of the shoes," he wrote on his Instagram account, referring to Lil Nas X's controversial "Satan Shoes". "That's it. The Devil shoes, the Devil in the video. Giving the Devil a lapdance. Wild, that s**t crazy."

The "Whole Lotta Choppas" spitter went on expressing his issue with the shoes and Lil Nas X's "MONTERO" music video, "That will never be no s**t I sympathize with or empathize with or agree with. But I wasn't wishing death on blood for real, nobody want a n***a dead."

"His main audience is kids," Sada argued. "What you showing to kids is you giving the Devil a lapdance. I don't want to walk in a room anywhere with any of my family and see my kids imitating what they see in that video in any way. That's not something I agree with. But yeah, I apologize to Lil Buddy if he feel I wanted him dead."

Lil Nas X No Longer Care About Being Good Role Model: 'It's Not My Job'