The 24-year-old Korean star shares a video of her dancing to Cardi and Megan Thee Stallion's hit song to celebrate 10 million followers on the video-sharing platform.

AceShowbiz - Cardi B was left impressed upon learning Rose was doing the "WAP" challenge. Having found the BLACKPINK star dancing to her hit collaboration with Megan Thee Stallion, the Manhattan-born raptress took to social media to share her reaction.

The 28-year-old, whose real name is Belcalis Marlenis Almanzar, made use of Twitter on Sunday, April 4 to retweet someone's post which contained Rose's dancing video. Alongside the footage, the femcee wrote, "She still looks sooo innocent...Sooo buteee." 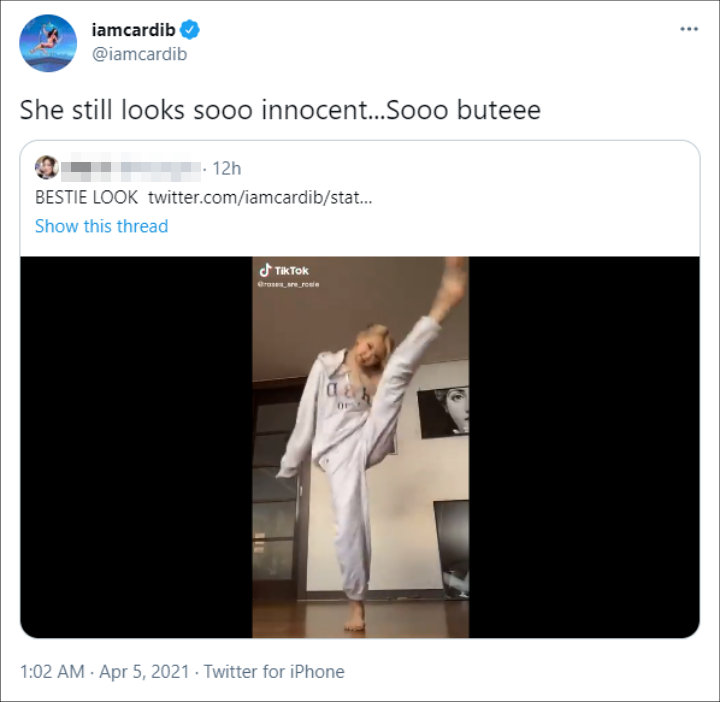 The "Bodak Yellow" hitmaker's tweet came after the Korean beauty put out the clip on her TikTok account. The 24-year-old star took part in the "WAP" challenge to celebrate her recent achievement of reaching 10 million followers on the video-sharing platform.

The video, which was put out earlier on Sunday, saw Rose sporting an oversized light gray hoodie and sweatpants. She began the challenge with a high kick before quickly making it drop and twerking. In the accompaniment of the post, she enthusiastically declared, "#10M !! Here you go."

Rose and Cardi previously teamed up for BLACKPINK's song "Bet You Wanna", which was released in October 2020. Aside from the wife of Offset, the group also worked with other artists such as Selena Gomez and Lady GaGa on their debut record called "The Album".

Having been thrilled to have collaborated with those hitmakers, Rose, Jennie, Jisoo and Lisa, expressed their excitement in an interview with CNN. "We grew up listening to a wide variety of music. We all grew up in different areas, but I would say some of the amazing people we collaborated with we all grew up listening to and we are big fans of them," the former first stated.

In response to Rose's statement, Jennie chimed in, "[Cardi B] is our first rap feature." She then added, "We are so excited to share this music with you guys."

Adele Scores Fastest-Selling Album as '30' Bows at No. 1 on U.K. Chart