'Fearless (Taylor's Version)', which will be released on March 9, will hear the 'Days Go By' singer singing a duet with the 'Love Story' hitmaker on one song, and belting harmonies on another.

The "Love Story" singer hinted Urban would be part of the reworked bonus album, released this week (March 9), in a cryptic video she posted online on Friday, April 2, and a day later she revealed the full track listing and stated she was thrilled when he agreed to be a part of the project.

"I'm really honored that @KeithUrban is a part of this project, duetting on 'That's When' and singing harmonies on 'We Were Happy'," she wrote. "I was his opening act during the 'Fearless' album era and his music has inspired me endlessly."

She added, "I'm counting down the minutes til we can all jump into this brave world together, filled with equal parts nostalgia and brand newness. Head first, Fearless."

Urban responded to Taylor's post, tweeting that her producers Jack Antanoff and Aaron Dessner asked him if he'd join their band and the country singer said, "hell yes!!"

He added, "They said you're gonna love our lead singer - she's fearless. We got to sing together and were so happy, and I said that's magic when stars align like that!!!!!" 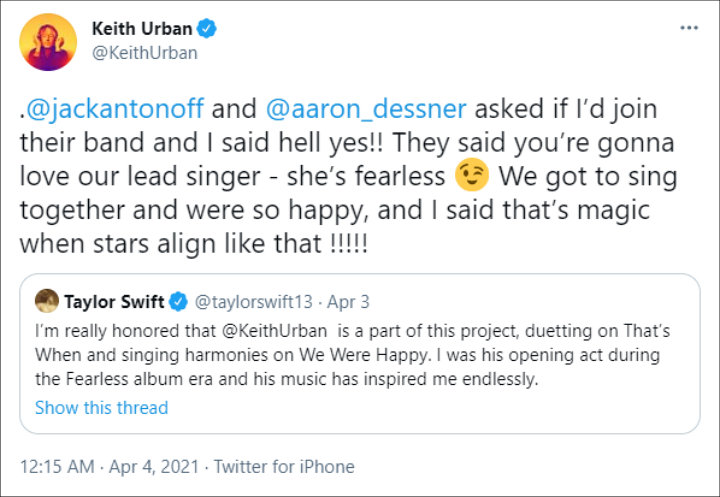 Swift is remaking all her albums up to 2017's "Reputation" after the rights to the records were sold to music mogul Scooter Braun by her former record label boss without her permission. Taylor has already released two tracks - a reworked "Love Story" and a previously unheard collaboration with Maren Morris, called "You All Over Me" - and previewed a third, "Wildest Dreams (Taylor's Version)".