After the daughter of Kim Zolciak-Biermann teased that she might have tied the knot with someone, some of her followers dub her 'too immature' to settle down.

AceShowbiz - Brielle Biermann might have already tied the knot. The "Don't Be Tardy…" star, who was recently in Las Vegas with her parents Kim Zolciak and Kroy Biermann to attend the opening of the Virgin Hotel in Sin City, sparked marriage rumors after sharing some cryptic tweets.

The 24-year-old reality star made use of Twitter on Sunday, March 28 to send out a tweet that read, "married. Don't care." It was the same message that she put out a few days prior on the blue-bird site. 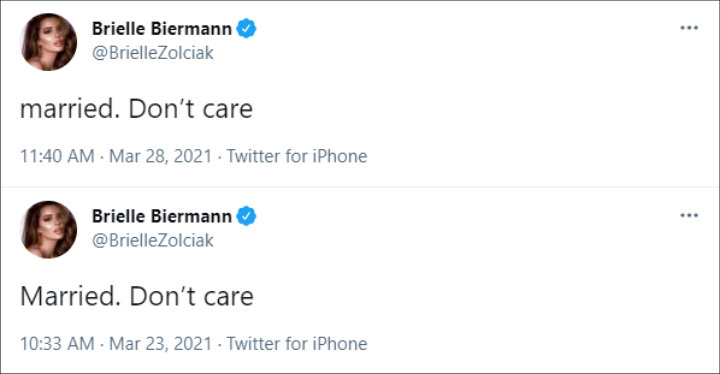 Some of Brielle's fans have since congratulated her for the news. One user in particular raved, "Congrats !! So happy for you." Another sent similar sentiment, "Im happy for you!" A third meanwhile, challenged her statement by replying, "Show us the ring?"

Despite the positive feedback, the TV personality received some unpleasant comments from others. One individual penned, "Yah right. Too immature for marriage." Another echoed, "She's WAY TO IMMATURE. It's just another stupid post. What really makes me mad is how dumb is it to girls Act. Is it an act or are they really that stupid?"

It was unclear to whom Brielle got married to. However, back in December, her mother Kim revealed that she got some DMs from NFL players which irritated Kroy, a former professional football player himself. When speaking on "HollywoodLife Podcast‬", she shared, "We find it funny like, oh, this NFL player is DM-ing Brielle, and Kroy's like, 'Oh, God.' "

Brielle was previously in a romantic relationship with Michael Kopech from May 2016 until March 2018. Years after the split, the baseball pitcher wed "Riverdale" star Vanessa Morgan. After tying the knot in January 2020, however, he filed for divorce in June the same year.

In July, many of her fans told her to get back together with Michael following his divorce report. When she shared a picture of herself on Instagram, one of her followers teased, "I hear Micheal Kopech (sic) is available...." Another urged, "Go pick up Michael. He's divorced." A third user chimed in, "Yo go get Mikey back!"

Brielle Biermann Calls Out Critics of Her Ever-Changing Look