Having been slammed by Republicans for her raunchy set at the annual awards show, the 'WAP' hitmaker fires back by asking why children were still up at 10 P.M. on Sunday.

AceShowbiz - Cardi B has clapped back at critics and Republicans, who have slammed her raunchy performance at the Grammys on Sunday, March 14, reminding them they had the option of turning the telecast off.

The rapper performed a racy sequence alone before teaming up with Megan Thee Stallion for a rendition of their controversial 2020 hit "WAP", while writhing around on a massive prop bed.

America's Federal Communications Commission was flooded with complaints following the show, and various pundits on conservative TV network Fox News took aim at the provocative performance, insisting it was too much for primetime television.

Cardi has fired back at her detractors, tweeting, "The Grammies [sic] are PG. That means parental guidance. Meaning is your job like it is to mine to my child to monitor what they watch. My performance was around 10pm on a Sunday Your child should be in bed ready for school the next day why are they up watching Wap [sic]". 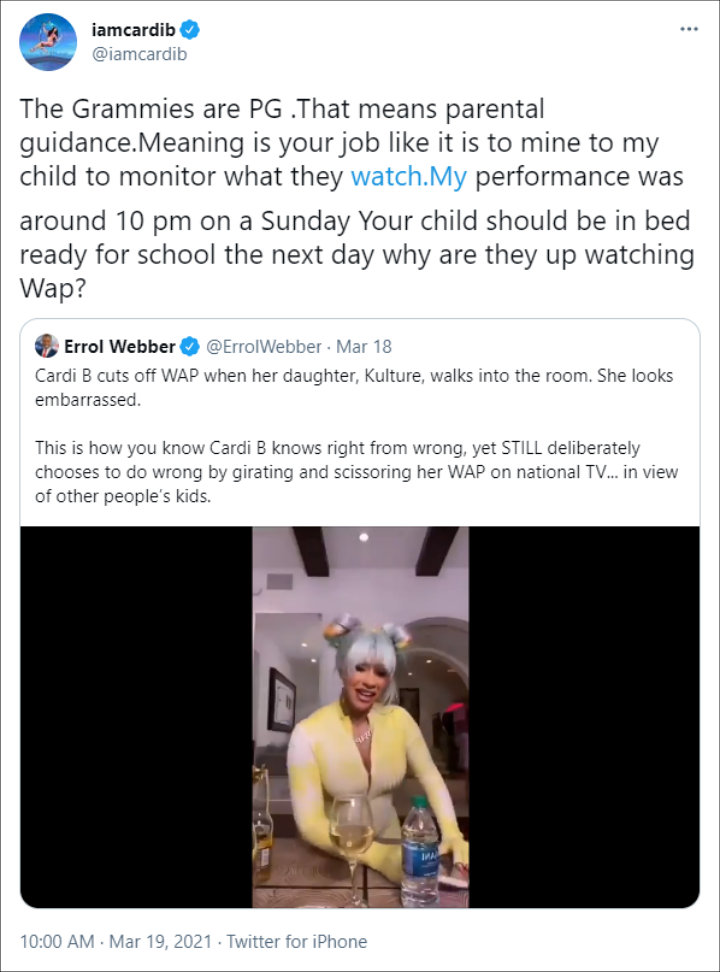 Cardi B defended her 'WAP' performance at the Grammys.
Editors' Pick

The rapper has also thanked Fox News for boosting the YouTube views of her performance at the Grammys, referencing conservative commentator Candace Owens' comments on Tucker Carlson's Monday night show, when she said, "Fundamentally, we are seeing the destruction of American values and American principles. And it's terrifying!"

Owens added, "Parents should be terrified that this is the direction that our society is heading towards. Again, we are weakening America... We are setting the stage, and it feels like we are looking at corrosion, like we are about to see the end of an empire." 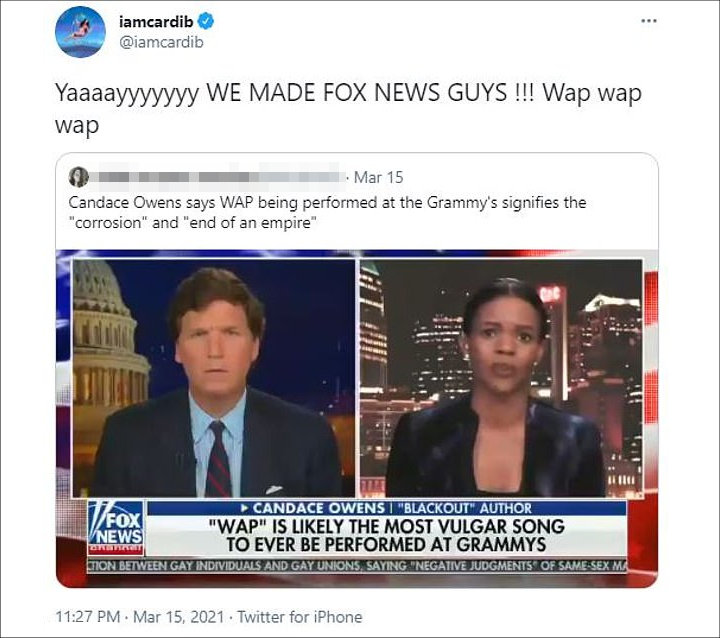 The rapper fired back.

Cardi fired back on Twitter, writing, "Yaaaayyyyyyy WE MADE FOX NEWS GUYS!!! Wap wap wap. STREAM UP AND WAP. REMEMBER GROWN PARENTS ONLY YOU CAN MONITOR WHAT YOUR KIDS WATCH NO1 ELSE [sic]."