Touched by Brandon Boulware's powerful speech against a bill that will block trans athletes from participating in high school sports, the 'On the Floor' hitmaker reminds, 'love changes the world.'

AceShowbiz - Jennifer Lopez was deeply moved by a father's fight for his transgender daughter's right as an athlete. After Brandon Boulware's testimony at the Missouri state House went viral, the "On the Floor" hitmaker helped to further spread his powerful speech online and admitted that she was touched by it.

On Tuesday, March 16, the 51-year-old uploaded a video of Boulware's speech on her Instagram feed. Along with it, she shared how she felt by writing in the caption, "I love... this touched me... a parent's love... love changes the world... [three heart emojis]." Not stopping there, she also highlighted news articles about Boulware's testimony on her Twitter and Instagram Story accounts. 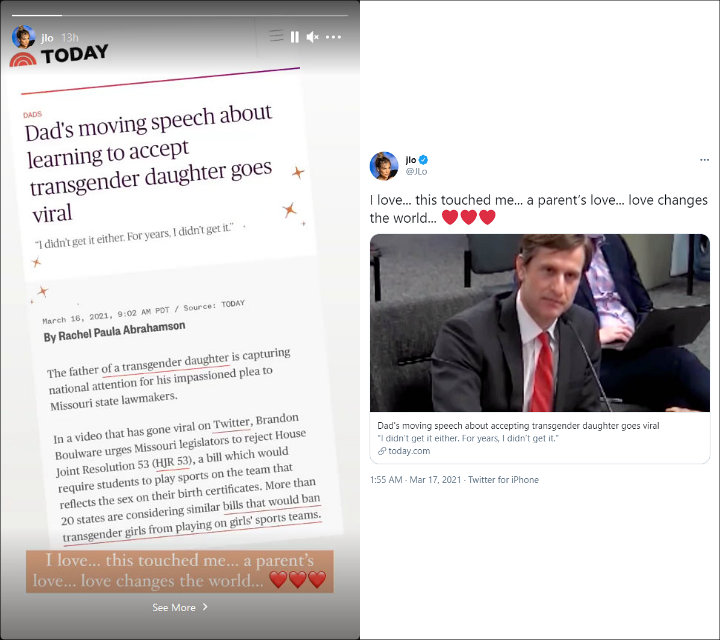 Boulware talked about his journey in accepting his daughter's sexuality as he urged Missouri legislators to vote against House Joint Resolution 53. The proposed bill itself would hinder trans athletes from participating in high school sports in Missouri since it requires them to participate under the gender listed on their birth certificate.

Pleading on behalf of his daughter, Boulware began by introducing himself as "a husband and father of four kids - two boys, two girls - including a wonderful and beautiful transgender daughter." He went on to tell lawmakers that he used to force her daughter to wear boy clothes, get short haircuts and play on boys' sports teams. He stated that he wanted to protect her from being teased.

Boulware then admitted it took years for him to understand how "miserable" he made her feel, and detailed an incident that made him realize that his "daughter was equating being good with being someone else." He continued noting that when he began to accept his daughter and let her live authentically, he saw an immediate transformation in her.

Pointing out that his daughter has since joined the girls' volleyball team, Boulware told legislators, "I ask you. Please don't take that away from my daughter or the countless others like her that are out there." He concluded his speech by stating, "Let them have their childhoods. Let them be who they are. I ask you to vote against this legislation."

Lopez, in the meantime, has shown support for the LGBTQ community for quite a long time. Back in 2020, she shared on Instagram a short film, titled "Draw With Me", about transgender youth and their journey of coming out to their family.

The mother of 13-year-old twins, Emme and Max, went on to explain that it is "a story that's very close to my heart because it was a family affair." She elaborated further, "It's about accepting change and challenges with love and knowing that whenever we do, anything is possible."

When accepting the Vanguard Award at the 25th GLAAD Awards in 2014, Lopez credited late Aunt Marisa for being her big inspiration in supporting the LGBTQ community. "I also realized the quiet lessons I learned from my family about love, tolerance, and acceptance. We loved her. That was all because of her," she stated at the time.