The Cleveland, Ohio-based rocker, who passed away at his home on March 5, stepped down after 30 years on the air at radio station 98.5 WNCX in February due to his ill health.

AceShowbiz - Rocker and radio personality Michael Stanley has lost his battle with lung cancer. The Cleveland, Ohio-based star passed away at his home on Friday, March 5. He was 72.

Stanley enjoyed national chart success with "He Can't Love You" but really made his name as a popular DJ at radio station 98.5 WNCX. He stepped down after 30 years on the air last month (February 2021), due to ill health.

On Saturday, the radio station shared a letter written by Stanley for his fans. "Hey gang... Well, if you're reading this then I am off to catch up with that big club tour in the sky," the letter read. "But before the bus pulls out I wanted to thank all of you for being a part of my musical journey."

"Somebody once said that if you love your job then it's not really work," it continued. "And if that's true (and I definitely think it is) then I have been happily out of work for over 50 years! Sure it would have been nice if this had all lasted a bit longer but my time on this mortal coil has been blessed with great family, friends and coworkers and you can't ask for much more than that!"

"So thanks again, take care of yourself and each other and remember, now more than ever: It's your world... pay attention! Peace," Stanley's letter concluded. 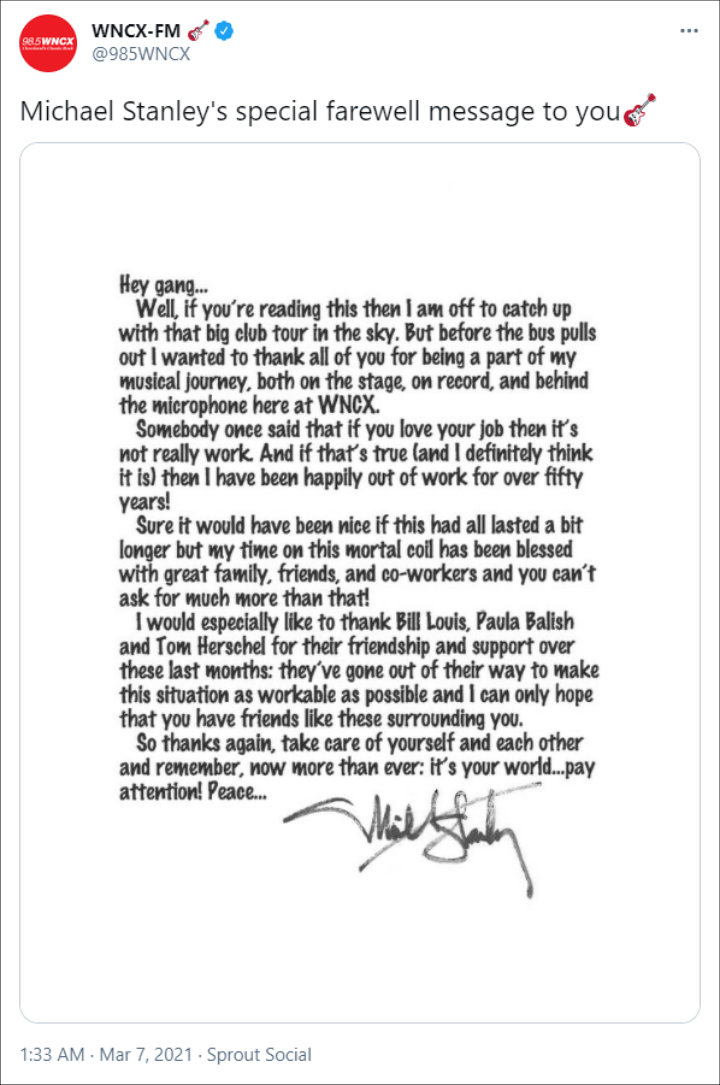 Stanley played himself on an episode of "The Drew Carey Show". His music career began in The Tree Stumps and Silk, before he secured a solo record deal in 1969 and formed the Michael Stanley Band.

The group recorded 11 studio albums and set concert attendance records in Ohio, but failed to make waves across the U.S. until "He Can't Love You" cracked the Billboard Top 40 in 1981. The band also charted with "My Town" in 1983.

Stanley completed a final album before his death and "Tough Room" will be released posthumously later this year.

Paying tribute to the late star on Saturday, bosses at the Rock and Roll Hall of Fame in Cleveland issued a statement calling him "our city's most beloved musician, songwriter and rocker".