Hashtags #RIPELON starts to trend on Twitter with fake screenshots of news articles circulating online, prompting moderators on the Tesla sub-Reddit to address the rumors.

AceShowbiz - Elon Musk is the latest target of Internet death hoax. On Friday, March 5, trolls appeared to try to spread rumors that the Tesla founder died while the successful businessman is still alive and well.

Hashtags #RIPELON started to trend on Twitter with fake screenshots of news articles circulating online. Amid the confusion, fact-checking website Snopes set the record straight in a tweet. "We're not exactly sure why people started to spread a death hoax about Elon Musk," so the account wrote on the blue bird app, "but he's not dead - and screenshots of articles saying so are fake." 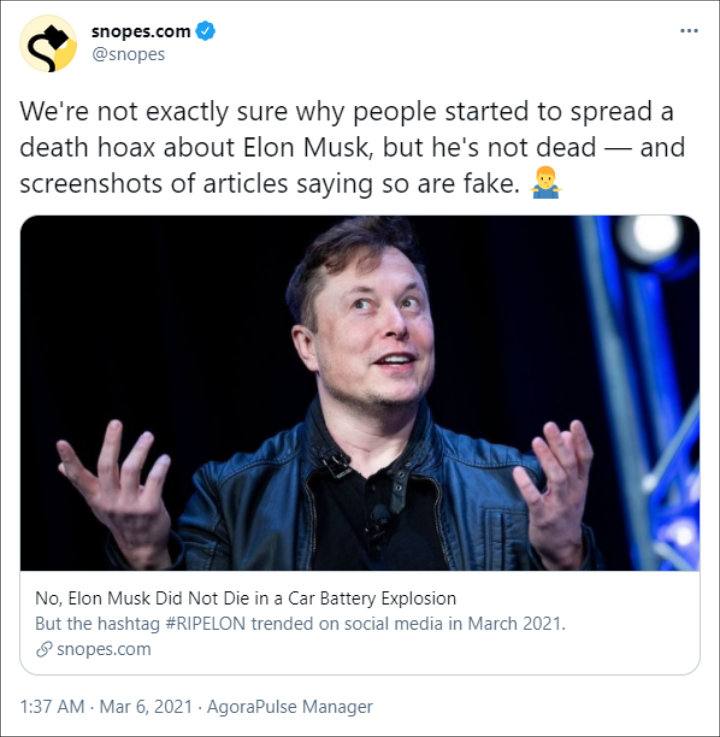 Moderators on the Tesla sub-Reddit also addressed the rumors about the father of seven's wellbeing. "Don't fall for these fake stories. They are posting fake links that lead to nowhere and posting screenshots from said fake articles. They are NOT real. Elon Musk is alive and well. There was no factory explosion. The only real bit of information they contain is the fact the stock went down a bit," the account urged.

"It's times like these that I must remind myself that twitter is NOT real life. It's a dim distorted reflection of reality consisting of garbage opinions, mud-brain hot takes, and edgy memes. Anyway, that's my tweet I'll see ya next month lol!" a person reacted to the tweet.

Some other, meanwhile, speculated that it had something to do with stocks. "Idk if its fake, ive looked into it and it honestly just seems like large sources are trying to avoid stock crashes," one person opined. "Market manipulation to make money on shorts probably. The stock took a marked dip today, probably due to this fake news," one other echoed.

Elon himself has yet to comment on the death hoax.