Shaken by the incident that happened while she was on live chat with her fans, the 'I'm a Mess' hitmaker promises that she will make sure the guy 'never get on Instagram ever again'.

AceShowbiz - Bebe Rexha is in the hunt of a social media flasher. Being left "traumatized" by an unidentified man who exposed his private part to her during a recent Instagram livestream, the "Me, Myself, and I" singer is pleading with her fans to help her find the name of the man's account.

On Thursday afternoon, March 4, the 31-year-old singer was forced to cut her virtual session with her devotees short after one participant exposed himself on the screen. Shortly thereafter, she came back and explained to the others, "I'm so sorry, that is disgusting. It's nasty that he came on my live chat and just showed us his penis. I'm really sorry about that."

"I did not know that was going to happen," the Grammy nominee went on to say. "Yo, honestly how could you come on my live chat when there's kids and people and showing us your f***in' d***?" She then asked her followers to help identify the flasher, "So if you guys know his name, can you guys please send me his name so I can make sure he will never get on Instagram ever again?"

The singer who has just released a new single "Sacrifice" further called out the flasher by stating, "You should be ashamed of yourself 'cause you have a small thingie." Though she was apparently still affected by the whole incident, she stated, "So let's just move on. That guy was crazy, sick in the head. I'm traumatized. What the hell was that? Honestly, I’m traumatized."

After ending the session, Rexha took to Twitter to further seek help in finding out the flasher's username. She first tweeted, "I need the Instagram name of the guy who did what we did. I need to report him please. Please investigate. NOT OKAY." In a following tweet, she admitted to be left shaken, adding that she "thought it was a joke." 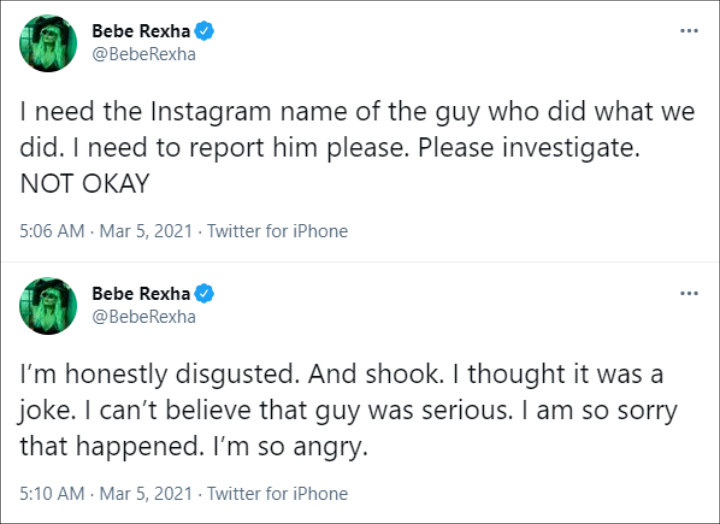 Bebe Rexha asked fans to find the name of an Instagram flasher.

Bothered and angered by the incident, the girlfriend of filmmaker Keyan Sayfari admitted to Variety, "I kind of felt disrespected." When asked about what led to the incident, she dished, "I thought he was trying to be smart … by hating on the haters. And I know it's not the best way to go. So then I called him and I was so confused. Like: is this a joke? Is somebody filming a picture of their screen?"

On what message Rexha has for Instagram in the wake of the incident, the "Meant to Be" hitmaker recalled what she told her mother when the latter asked her why she did not kick the flasher out faster. "When you call somebody in the live chat, they have to X themselves out now," she explained. "Before, you could X them out, so Instagram should bring back that feature."