While James has denied the allegations by a 16-year-old who claimed the makeup guru was sexting him, Trisha isn't buying James' explanation and calls him out for putting 'blame on someone else.'

AceShowbiz - Trisha Paytas isn't buying James Charles' explanation after he responded to grooming allegations by a teen. On Friday, February 26, a 16-year-old boy put up a video on TikTok in which he detailed the makeup guru's alleged flirty texts to him which made him "uncomfortable," but James has quickly denied it.

Trisha, however, has her opinion on James unshaken despite the latter's denial. Posting a screengrab of James' statement on Twitter, she accused her fellow YouTuber of victim shaming and putting the "blame on someone else for your grooming/predatory ways."

"Duuuude what ??? James Charles has just admitted to sexting with a minor. Do not victim shame period," she wrote. "But victim shaming a child - is DISGUSTING. do not put blame on someone else for your grooming/predatory ways."

Trisha Paytas called out James Charles for his response to grooming allegations.

Agreeing with Trisha that James was still in the fault, one follower commented, "If I opened my Snapchat to see several photos from an individual I JUST added, including lewd shower photos, I would unfriend them immediately." Another shared the same sentiment, "This is exactly what I was thinking!! Appalled that James thinks that's ok in the first place. And then him saying he was excited he was 18??? Ewe."

Another opined, "even if he was of age, it's still wrong, influencers or celebs should never sext a fan. it's a power complex." Someone else cited previous accusations leveled at James, writing, "This isn't a coincidence. This keeps happening over and over again. When are people going to see the pattern and start standing with the underage victims of James Charles? I don't know how he still has a platform. He twists each allegation by making himself out to be the victim."

The 16-year-old boy said in his TikTok video that after he followed James on Snapchat, the 21-year-old Internet personality followed him back. Sharing proof of their conversation, the boy claimed that James started making sexual comments after seeing his post in a bathroom. He also said that James sent him sexually-explicit pictures.

James later issued a denial via Twitter. "There's a video going around about me on TikTok and Twitter of a guy calling me a groomer and I want to address it right away," he opened his statement. "The accusation that I have groomed this person is completely false."

Sharing his own account of his conversation with the boy, James detailed, "Last week, I came across someone on my Instagram explore page, saw he followed me, and added him on Snapchat. The next morning, I woke up to several snaps from this person being excited I added him back, saying he loved me, and also lewd photos of himself in the shower. I asked how old he was right away and he told me he was 18 so I started flirting back."

James continued recounting, "Later in the day, he said a few things that made me question the validity of his original age answer and when I asked him to confirm his age once again, he admitted he was 16. I told him I was really uncomfortable and apologized for flirting, but he insisted on continuing talking, saying it could be our little secret, he's a fan of mine and would never tell anyone. I told him I wasn't okay with this, he started getting upset, and at this point, I unfriended him. We haven't spoken since." 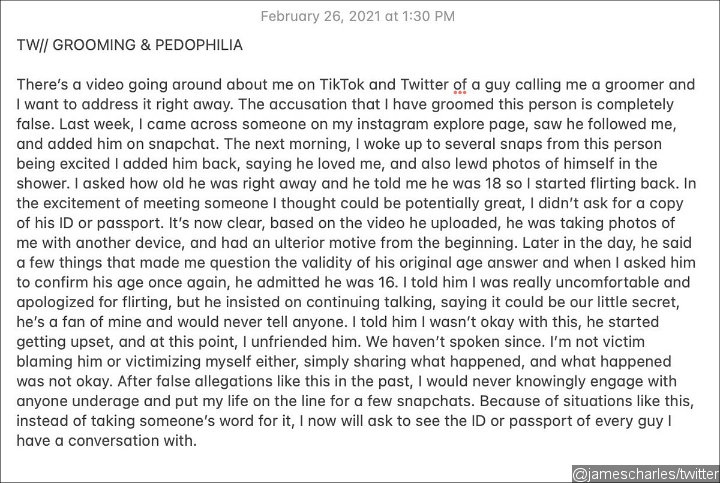 "I'm not victim blaming him or victimizing myself either, simply sharing what happened, and what happened was not okay," he stressed. "After false allegations like this in the past, I would never knowingly engage with anyone underage and put my life on the line for a few snapchats. Because of situations like this, instead of taking someone's word for it, I now will ask to see the ID or passport of every guy I have a conversation with."