The 49-year-old 'The Leftovers' alum has taken to his Instagram Story to share a black-and-white picture of the 'Friends' alum who turned 52 this week.

AceShowbiz - Justin Theroux and Jennifer Aniston once again show people that they're one of the friendliest celebrity exes. "The Leftovers" alum gave the "Friends" alum the sweetest birthday shoutout on Thursday, February 11.

The 49-year-old actor took to Instagram Story to share a black-and-white picture of the actress who turned 52 this week. She could be seen standing at the bottom of a staircase lined with mirrored walls. She was wearing a long jacket and glasses while a purse strung over her shoulder.

"Happy birthday @jenniferaniston," so he wrote, adding, "[heart emoji] you, B!" It remains to be seen what "B" actually stands for, but the actor has always referred to Jennifer as the nickname. 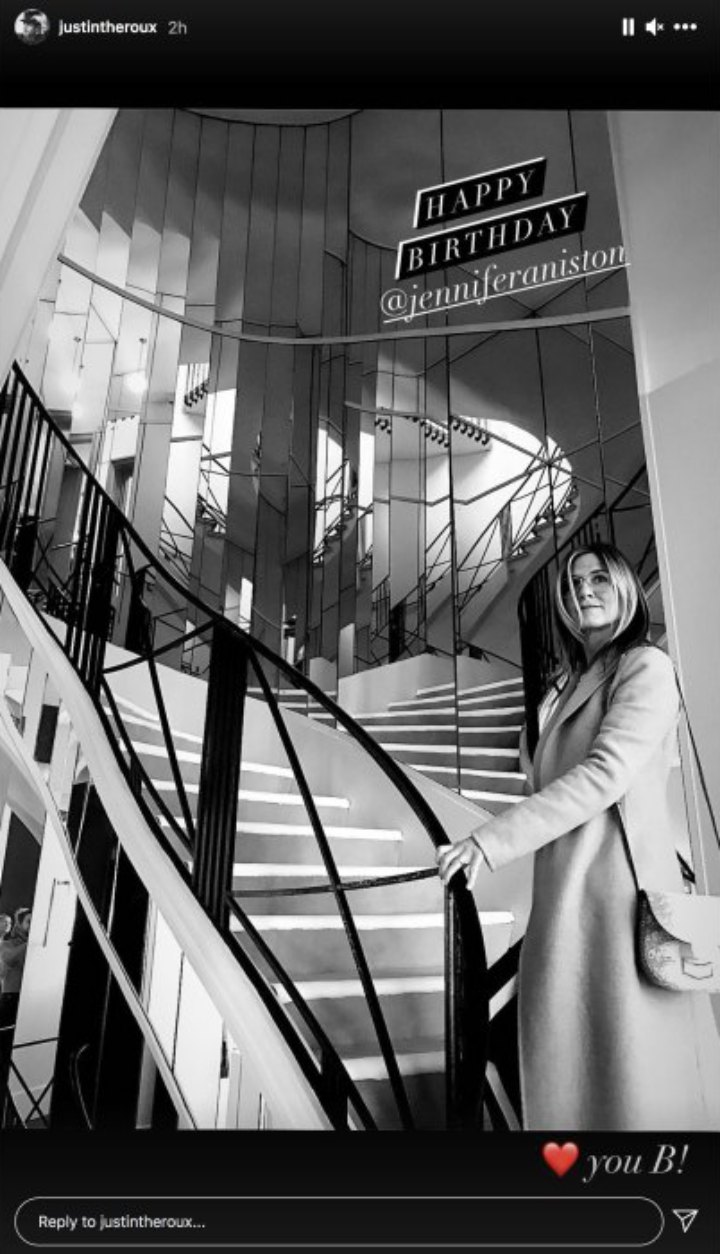 Jennifer and Justin announced their split in July 2018 in a joint statement that read, "In an effort to reduce further speculation, we have decided to announce our separation. This decision was mutual and lovingly made at the end of last year."

"We are two best friends who have decided to part ways as a couple, but look forward to continuing our cherished friendship. Normally we would do this privately, but given the gossip industry cannot resist an opportunity to speculate and invent, we wanted to convey the truth directly," the statement continued. "Whatever else is printed about us that is not directly from us, is someone else's fiction narrative. Above all, we are determined to maintain the deep respect and love that we have for one another."

Despite splitting, Justin and Jennifer have maintained close relationship. Back in July 2019, the pair seemingly reunited as they mourned the death of a beloved member of their family, a dog named Dolly. At the time, "The Girl on the Train" star broke the devastating news on Instagram alongside a series of photos, including one featuring him holding hands with a woman that fans speculated was Jennifer.

"Tonight, at sunset, after a heroic struggle... our most loyal family member and protector, Dolly A. laid down her sword and shield," he wrote in the caption. "She was surrounded by her entire family. 'The one that never deserts, the one that never proves ungratefu... is the dog - faithful and true, even in death.' - George Vest."

Cedrick Cotton of RnB Group Ideal Is Stabbed to Death, Mom Pleads for Killer to Surrender