AceShowbiz - Paramore lead singer Hayley Williams and Garbage's Shirley Manson are among the stars who have had strong reactions to a powerful new Britney Spears documentary.

The pop superstar's fans have been appalled by some of the footage in "Framing Britney Spears", now out in the U.S., particularly when a paparazzo, who trailed Spears during her 2008 meltdown, claimed on camera she liked being surrounded by photographers.

And some of her more famous devotees were shocked to learn more about the singer's conservatorship, with her father overseeing her finances and wellbeing for the past decade-plus.

"Just watched the 'Framing Britney Spears' documentary and have to say, there is something VERY weird, very wrong going on. #FreeBritney," Manson tweeted, referring to the fan movement set up to highlight the way the pop star is being managed.

Williams added, "No artist today would have to endure the literal torture that media/society/utter misogynists inflicted upon her. The mental health awareness conversation, culturally, could never be where it is without the awful price she has paid." 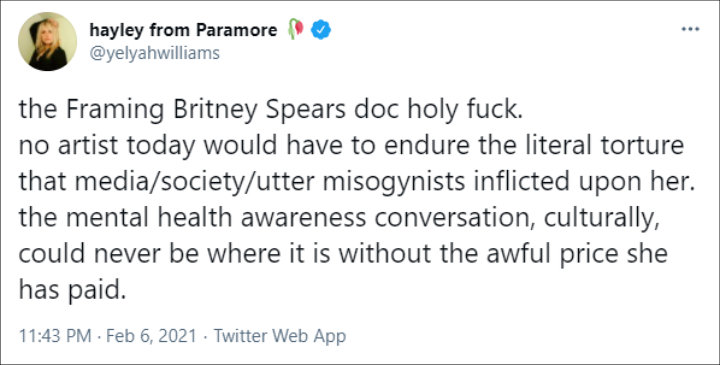 And, responding to a fan, who suggested many of the problems featured in the documentary still exist, she added, "i'll say this - as an artist, my very personal experience with misogynistic journalists/media is that over the last 15 years, it's improved." 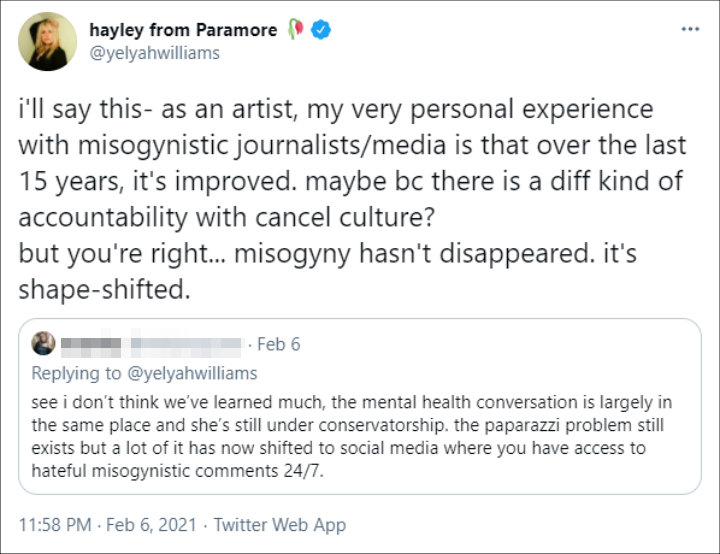 Meanwhile, Kacey Musgraves has encouraged her two million Instagram followers to watch "Framing Britney Spears", stating, "Never has one person been so used and abandoned by every facet around her. My heart goes out to her. She has always been such an inspiration to me my whole kid/teen life. Wish she could get a re-do."

Vanessa Carlton, Sam Smith, Hayley Kiyoko, and Liz Phair have also taken to social media after watching the film to offer their support to Britney.

The New York Times film also features interviews with blogger Perez Hilton, who boasts that when Britney Spears does badly, he does well, and the singer's ex-boyfriend Justin Timberlake, while her father, Jamie, is painted as a terrible, toxic force. But perhaps the most awkward footage is a hard-hitting 2003 TV interview, in which newswoman Diane Sawyer grills the singer and visibly upsets her by quoting Maryland's then-First Lady Kendall Ehrlich, who famously said she'd like to shoot Spears if she got the chance, due to the example the pop star was setting for American kids.