It starts after the wife of John Legend asks her 13.6 million followers on the blue bird app about 'the most expensive thing you've eaten that you thought sucked.'

AceShowbiz - Chrissy Teigen is known for sharing almost every little details of her life on social media. On Wednesday, February 3, the wife of John Legend asked her 13.6 million followers on Twitter about "the most expensive thing you've eaten that you thought sucked."

Sharing her own experience, the "Lip Sync Battle" co-host wrote, "one time john and I were at a restaurant and the waiter recommended a nice Cabernet. We got the bill and it was 13,000 dollars." She went on to recall, "HOW DO U CASUALLY RECOMMEND THAT WINE. we didn't even finish it and it had been cleared!!!"

While many were amused by Chrissy's anecdote, some fans thought it was such insensitive of the model to tweet that. "People are not going to relate to this," one critic told Chrissy. To that, Chrissy responded, "Didn't say it was and doesn't have to be. Should I be tiptoeing?" 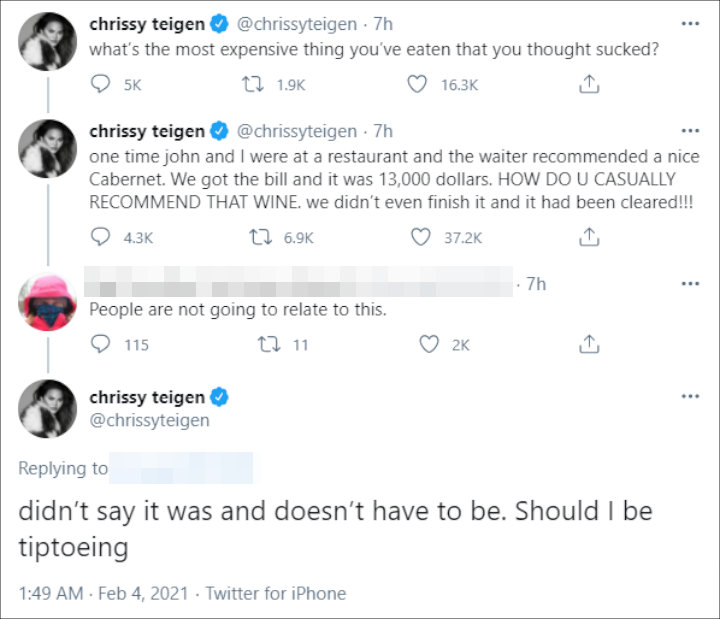 The 35-year-old star double down on her statement in a separate tweet. "hey, not everything I say on my twitter is going to be relatable to you because it is my life and my twitter and my stories," so she defended herself. The mom of two then sarcastically added, "I see your tweets, I get your jokes, you are so funny, yes, you really nailed me."

Still, the attack continued as one said, "it takes zero energy to not tweet things that show off how rich you are, in the middle of a global pandemic where countless people are dying and have lost their livelihoods, and yet... you just keep doing it. it's not about relatability, it's just so endlessly tone deaf."

"Maybe you can just understand that us Poor's are literally all suffering right now? And maybe we don't want to hear about how you accidentally bought something that costs literally half of what we make a year. 2 bottles of that wine could pay my whole salary," another user added.

However, not all of them were mean. One fan defended Chrissy, saying, "Ill never understand why its ok to be mean to anyone whether theyre rich or not. We’ve normalized bullying by wrongly disguising it as righteousness indignation. The world would be better if we acted with compassion for every single human. Im sorry for how others treat you."

Demi Moore on Surprise Runway Debut at Fendi Show: I Literally Felt Like a Little Kid

Chrissy Teigen on Diet Culture: I've Thrown All of That