The 'Deadpool' actor recalls his appearance on the PBS children's program after a social media user tweets about being delighted by him 'doing an A-Team gag' on the show.

AceShowbiz - Ryan Reynolds continues to provide online entertainment with his witty remarks. When looking back at his appearance on PBS children's program "Sesame Street", the "Deadpool" actor could not help but crack a raunchy joke about the costume he had to wear.

The 44-year-old shared his dirty quip on Twitter after a fan was delighted to find him "doing an A-Team gag" on the show. "Watching a little @sesamestreet with the kiddo, and its an episode with @VancityReynolds and the gang doing an A-Team gag. Its a delight, for both me and the kiddo," the individual tweeted alongside pictures of the actor in a big, blue letter "A" costume.

In response, the husband of Blake Lively reposted the tweet and quipped, "I remember how challenging it was to sing because the A-hole was so tight." He went on to jest, "But I pushed through because kids all over the country were counting on me." 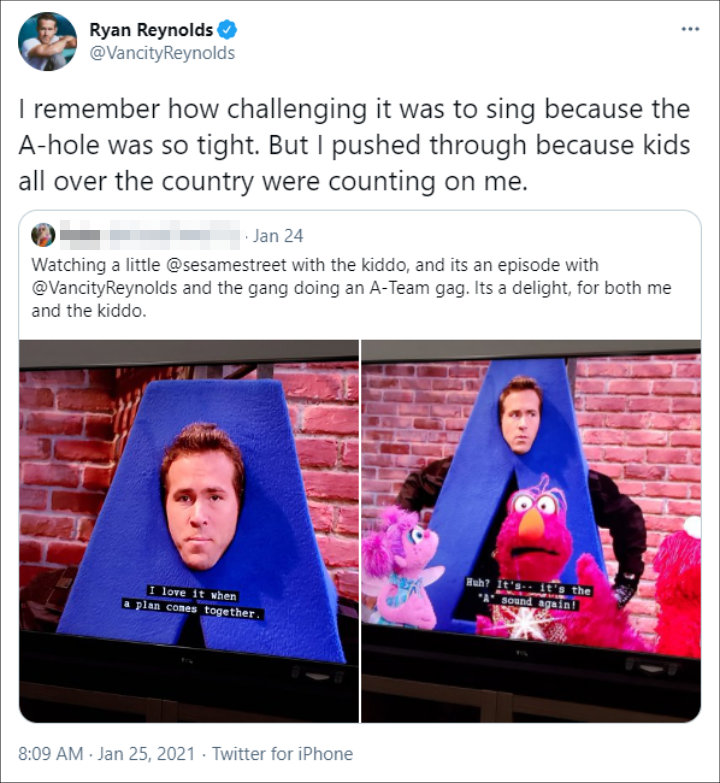 Ryan's joke has since caught the attention of his famous followers. One in particular was journalist Jake Tapper who was left speechless and only replied, "Ryan." Zach Braff of "Scrubs" was also left amused as he commented, "You had me at A-hole was so tight." Fellow actor Mark Ruffalo additionally sent out one crying emoji.

Ryan's fans also joined in the fun with one stating, "The A hole looks empty to me... was it so tight because you put it in the wrong hole?" Another chimed in, "Surely they could've loosened it a bit for you." A third jokingly said, "That's why we love you always thinking of the children lol." 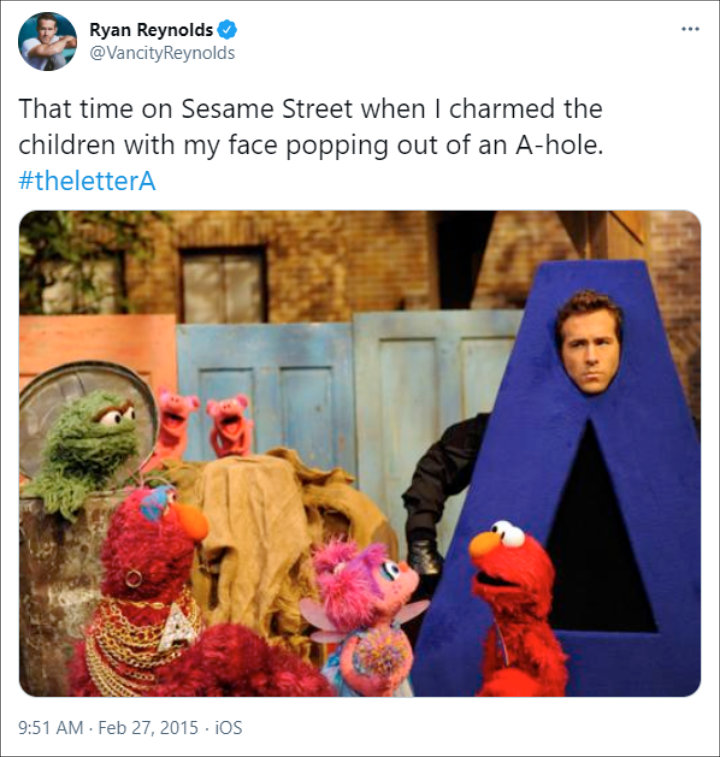 Ryan Reynolds joked about his face 'popping out of an A-hole' during his 'Sesame Street' cameo.

This was not the first time the "Free Guy" star joked about his "A" costume on the "Sesame Street". Back in 2015, he posted a picture of him guest starring on the show and tweeted, "That time on Sesame Street when I charmed the children with my face popping out of an A-hole. #theletterA." His cameo was originally aired on November 5, 2010. It was the 4225th episode.