The former basketball player catches wind of the wild reaction that he earned, prompting him to offer a clarification in a separate tweet that read, 'nothing sexual guys.'

AceShowbiz - Dwyane Wade wants to follow the trend. The former professional basketball player took to Twitter to share with his followers that he's been trying to get his wife Gabrielle Union on adult site OnlyFans.

"I'm trying to convince my wife that we should start a only fans account," Dwayne tweeted on Sunday, January 24. "and she's looking at me like...," he went on saying alongside a viral Sen. Bernie Sanders inauguration meme.

Fans were amused by the tweet though it seemed like Dwayne wasn't fully serious about the plan. "Retirement d wade is a whole new beast," one fan replied. An excited user, meanwhile, asked, "How much will it cost."

However, some of Internet users didn't think it was a good idea for them to join OnlyFans. "Sir your wife is an actress. Imagine how she will 'cancelled' and blackballed out of Hollywood If she did that. Not that I wouldn't mind seeing gabb in her birthday suit. But don't think it would be best for her lol," one person opined.

Dwyane caught wind of the wild reaction that he earned, prompting him to offer a clarification in a separate tweet. "nothing sexual guys. Get your mind outta there," he shared. 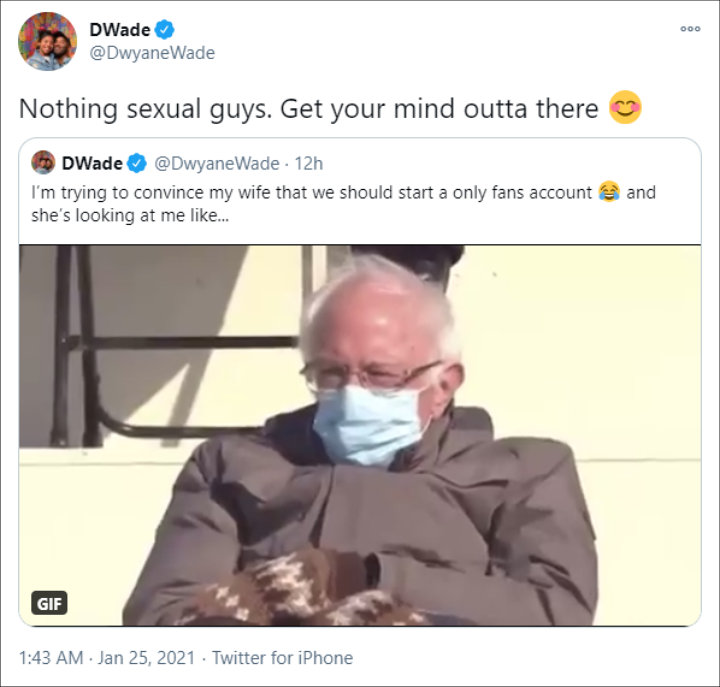 Should Dwyane and Gabrielle create an account on the adult site, they will join a long list of celebrities who make money from the website. Among them are Blac Chyna, Safaree Samuels, Erica Mena and rapper Casanova.