Fans are convinced that the 'Girl Meets World' alum addresses the alleged love triangle between her, the 'Drivers License' hitmaker and her co-star Joshua Bassett in her own song.

AceShowbiz - Sabrina Carpenter seemed to be sharing her side of the story on the love triangle drama surrounding her and Olivia Rodrigo. A few weeks after the latter dropped "Drivers License" which was believed to be a breakup anthem over her split from Joshua Bassett, the former appeared to make a response through her own brand new song.

The "Girl Meets World" alum released "Skin" on Thursday, January 21. Near the top of its lyrics, she sang, "Maybe we could have been friends/ If I met you in another life/ Maybe then we could pretend/ There's no gravity in the words we write/ Maybe you didn't mean it/ Maybe blonde was the only rhyme/ The only rhyme."

Sabrina appeared to confirm that she was the "blonde" girl mentioned in Olivia's "Drivers License". In the hit track itself, Olivia belted, "And you're probably with that blonde girl/ Who always made me doubt/ She's so much older than me/ She's everything I'm insecure about."

"Skin" has sent Twitter into a frenzy. One speculated, "Sabrina Carpenter just released her new song 'Skin' and it is definitely a shade to Olivia's 'drivers license'." Another wrote, "WAIT OKAY OLIVIA JUST RELEASED 'DRIVERS LICENSE' A MONTH AGO AND THEN WE HAD JOSHUA BASSETT CREATED A SONG CALLED 'LIE LIE LIE' AND NOW WE HAVE SABRINA CARPENTER WITH A SONG CALLED 'SKIN' ????"

The shading theories did not stop there. More have since shared their two cents on the matter with one stating, "Sabrina Carpenter threw that shade at Olivia wow." Someone else echoed similar sentiment, "not sabrina carpenter dropping a song and throwing shade towards 'drivers license'."

Despite the swirling speculations, Sabrina has her own explanation when it comes to her new song. According to PEOPLE, the 21-year-old singer and actress wanted to reflect on the strength amid challenges and the importance of focusing on joy. 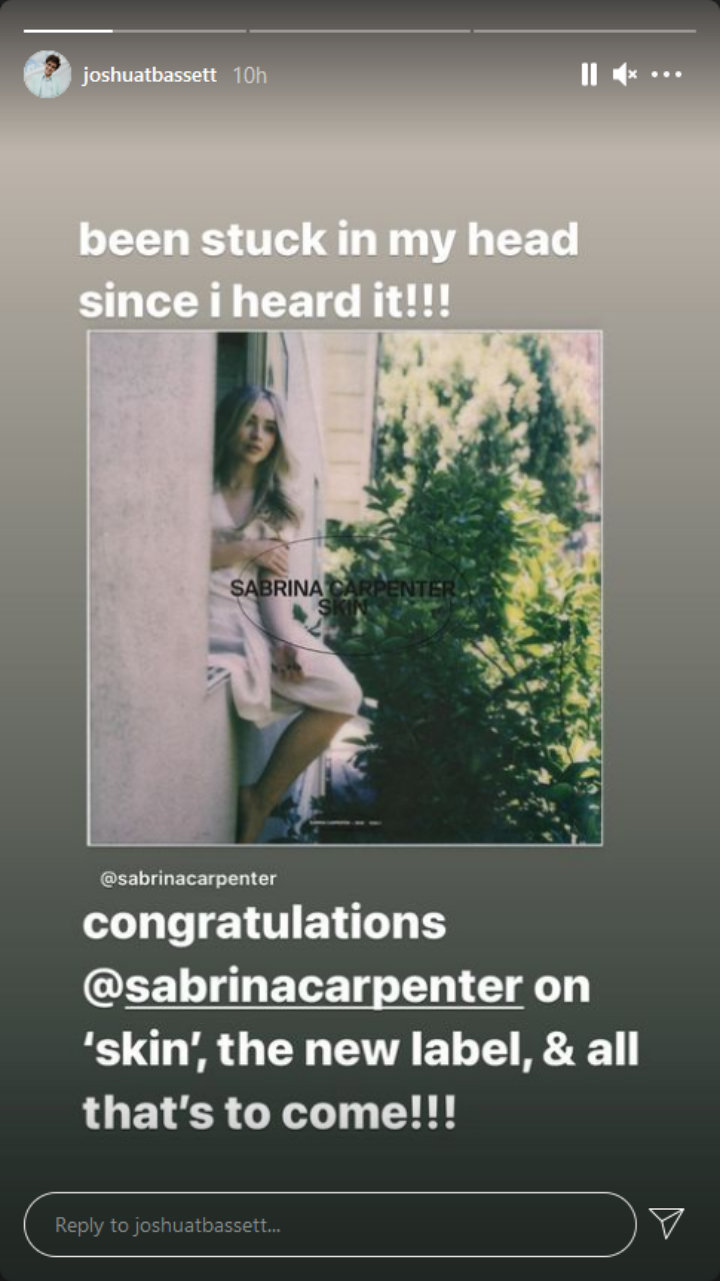 Shortly after Sabrina dropped "Skin", Joshua added more fuel to their love triangle drama by praising Sabrina for her new song. The "High School Musical: The Musical" actor shared on Instagram Story, "been stuck in my head since I heard it!!! Congratulations @sabrinacarpenter on 'skin', the new label, & all that's to come!!!"

Madonna's Daughter Rips Out Trolls Commenting on Her 'Thirst Trap'

Artist of the Week: Sabrina Carpenter