Lil Nas X responds to Jojo's Twitter selfie by writing, 'if u spell 'swag' backwards, it's 'gay,' ' while fellow YouTuber Colleen Ballinger tweets, 'I'm so proud of the woman you are becoming.'

AceShowbiz - JoJo Siwa has seemingly confirmed her sexual orientation. Just days after sparking coming out rumors with her lip syncing to Lady GaGa's "Born This Way", the YouTube sensation appeared to confirm the swirling speculations by wearing "best gay cousin" T-shirt in a social media post, prompting her to be showered with support from many.

Making use of Twitter on Friday, January 22, the 17-year-old internet sensation shared a photo of herself sporting a black T-Shirt with the words "Best. Gay. Cousin. Ever." printed on it. While she did not make any reference to the rumors, she wrote in the accompaniment of the photo, "My cousin got me a new shirt."

JoJo has since received supportive comments from many of her famous followers. One in particular was openly-gay rapper Lil Nas X who tweeted back, "if u spell 'swag' backwards, it's 'gay'. coincidence??" Fellow YouTuber Keemstar raved, "Will always support you." 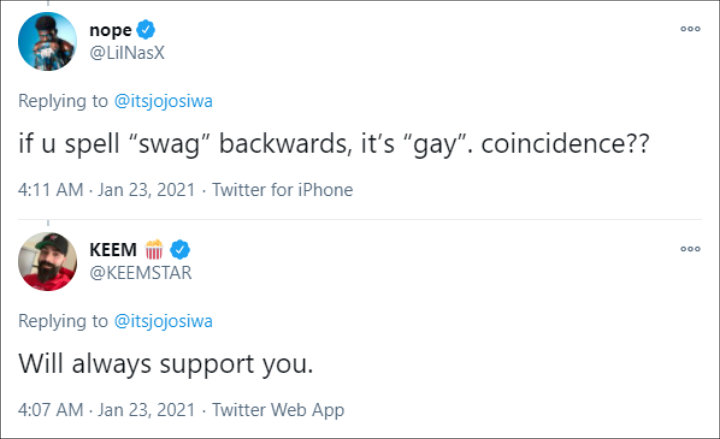 Another YouTube star, Colleen Ballinger, reposted JoJo's tweet and declared, "I've known you a long time and this is the happiest I've ever seen you. You're absolutely glowing and I'm so proud of the woman you are becoming! love yoooou!" In response to Colleen's post, JoJo wrote back, "I love you so much." 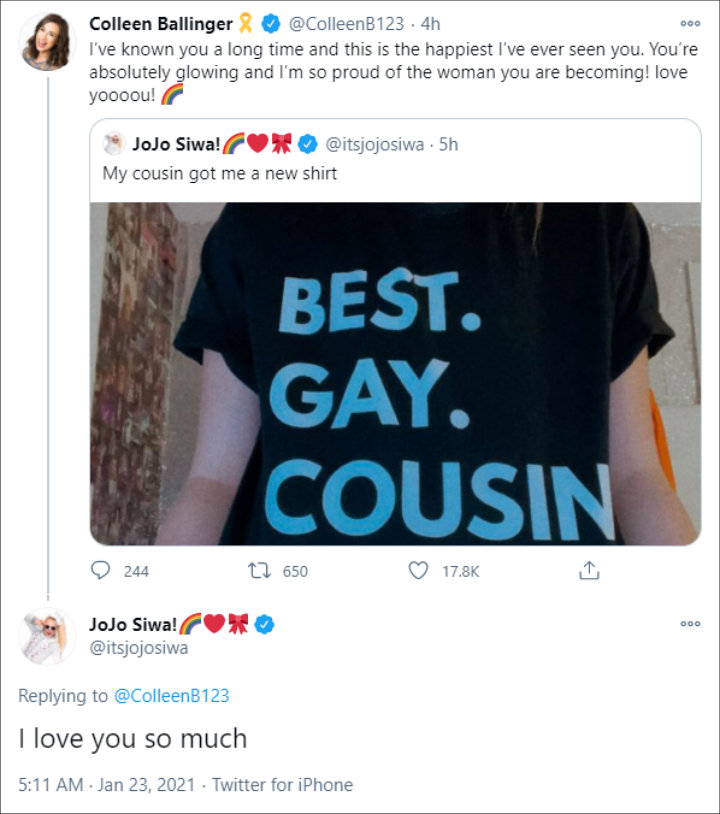 Hours prior, the "Dance Moms" alum was seen dancing and singing to Paramore's "Ain't It Fun" in Kent Boyd's TikTok video with "Teen Beach Movie" stars. "Baby now you're one of us," she mouthed the lyrics. In the caption, it is noted, "Now you're one of @itsjojosiwa @molleegray @garrettclayton91 @jekajane #pridehousela."

Back in May 2020, JoJo opened up about being authentic. Speaking to E! News' "In the Room", she shared, "I'm genuine, I am who I am. And, you know, I'm not fake in any which way. I just live my life and that really shows when I'm creating YouTube videos, creating music, whatever I'm doing, it's truly who I am."

JoJo Siwa on Coming Out as Pansexual: I Am So Proud to Be Me