The 'Born to Die' artist has taken to Instagram to share a cover art for her upcoming album, 'Chemtrails Over The Country Club', but it is her caption that enrages most people.

AceShowbiz - Lana Del Rey has enraged people with yet another racially insensitive comments. The singer was slammed online over comments she made after posting a cover art for her upcoming album, "Chemtrails Over The Country Club", on Sunday, January 10.

In the cover art, Lana seemingly was trying to highlight diversity as she was seen posing with a bunch of female friends who are from different races. Alongside the black-and-white picture, the 35-year-old wrote in the caption, "As it happens when it comes to my amazing friends and this cover yes there are people of colour on this records (sic) picture and that's all I'll say about that but thank you."

She went on saying, "My beautiful friend Valerie from Del Rio Mexico, my dearest friend Alex and my gorgeous friend Dakota Rain as well as my sweetheart Tatiana. these are my friends this is my life. We are all a beautiful mix of everything- some more than others which is visible and celebrated in everything I do."

"In 11 years working I have always been extremely inclusive without even trying to. My best friends are rappers my boyfriends have been rappers. My dearest friends have been from all over the place, so before you make comments again about a WOC/POC issue, I'm not the one storming the capital, I'm literally changing the world by putting my life and thoughts and love out there on the table 24 seven. Respect it," so she concluded. 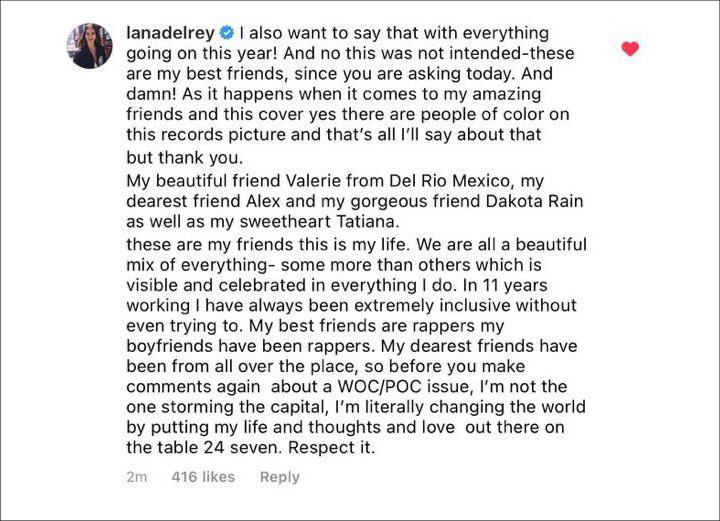 After catching wind of the post, some Internet users quickly blasted Lana for the caption. "Comes off angry also, she equated rappers to black people which was ......racist," one user pointed out why the comments were offensive. Mocking the singer, another critic wrote, "I aM noT raCisT I haVe blAcK fRienDs."

" 'I've had rapper boyfriends' is the new 'I have a black friend...I'm not racist' yo did Lana Del Rey just," another person similarly tweeted. One user, meanwhile, wrote, "Lana del rey couldve literally released the album silently but she had to remind us that she's changing the world one rapper boyfriend at a time."

"Sigh. It's 2021 and Lana Del Rey is still a nightmare for her publicist," someone else commented.

Following the backlash, the "Young and Beautiful" singer has since edited the caption. "There's always turmoil and upheaval and in the midst of it- there's always beautiful music too. introducing my new album chemtrails over the country club," read the new caption.

Pop Smoke's Second Posthumous Album to Be Unleashed in Mid-July