Fans of the 31-year-old Grammy-winning artist think she disses the model in 'It's Time To Go' after dropping two bonus tracks of her latest album 'Evermore'.

AceShowbiz - Taylor Swift might have hid something she wanted to say to her former best friend Karlie Kloss in "It's Time to Go". Shortly after dropping two bonus tracks off her album "Evermore", the "Cardigan" singer was speculated to have thrown shade at the model in her brand new song.

The 31-year-old released the song on Thursday, January 7. The first verse of the lyrics read, "When the words of a sister come back in whispers/ That prove she was not, in fact, what she seemed/ Not a twin from your dreams/ She's a crook who was caught." Many on Twitter have since suggested that the line was aimed at the former Victoria's Secret Angel.

One user speculated, "Wait...did Taylor Swift diss former 'best friend forever' Karlie Kloss on 'it's time to go' ?" Another chimed in, "taylor swift warned you that there's nothing she does better than revenge so it really should come as no surprise how beautifully she drags both karlie, scott and scooter in the bonus tracks."

The shading theories did not stop there. More came forward with one stating, "i know there's a lot going on but taylor swift released a song calling karlie kloss 'a crook who was caught.' " Someone else tweeted, "I thought it was kind of funny when Taylor Swift called Karlie Kloss a 'crook' but not because I'm taking sides." 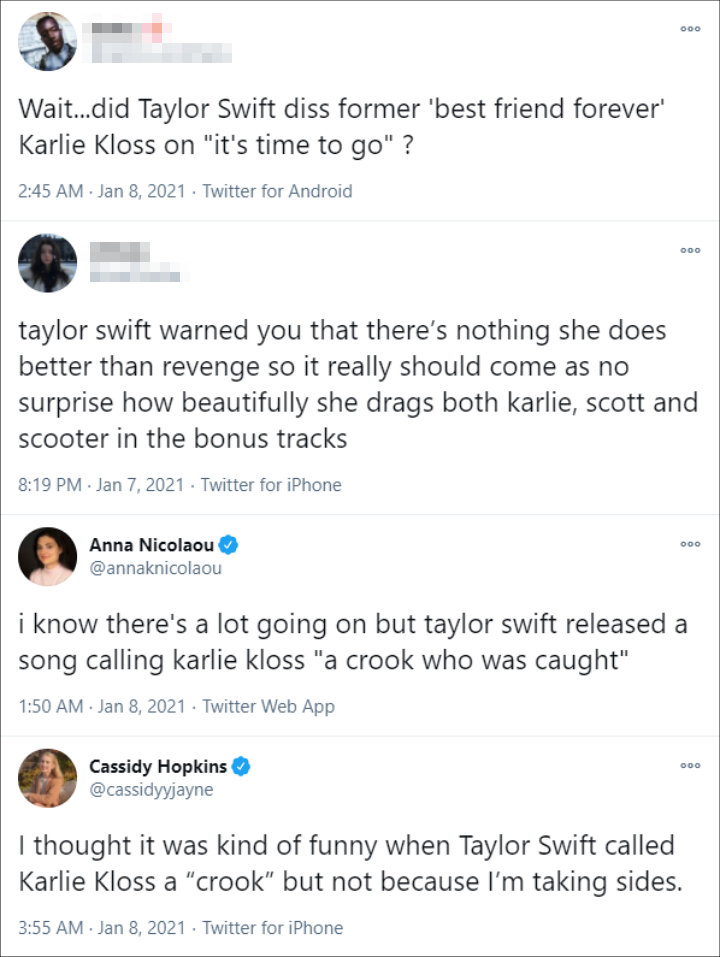 Fans were convinced that Taylor Swift threw shade at Karlie Kloss in 'It's Time To Go'.

Taylor and Karlie have been rumored to be in a feud multiple times. It began after the Grammy-winning artist did not include the latter in her "Look What You Made Me Do" music video. She also did not attend the model's wedding to businessman Joshua Kushner. At the time, she was on tour in Australia.

Karlie, however, set the record straight in March 2019. Reacting to the speculations during an interview on "Watch What Happens Live", she praised Taylor by stating that the singer is "incredible." She elaborated, "And I feel really lucky to call her a friend. She's one of the hardest-working women and I loved her essay."

Unfortunately, the beef speculations resurfaced in June the same year after Taylor was once again absent from Karlie's second wedding celebration. Among the guests were Katy Perry, Orlando Bloom and the "Bad Blood" songstress' music rival, Scooter Braun.