The 'Holy' singer sets the record straight on his relationship with the church after the controversial exit of pastor Carl Lentz, and shares his outlook on church and religion.

AceShowbiz - Justin Bieber has made it clear after the controversial exit of pastor Carl Lentz that he is not affiliated to Hillsong Church. Responding to the swirling rumors that he has been studying to become a minister for the church, the "Holy" crooner set the record straight through a social media declaration.

The singer husband of Hailey Baldwin offered his clarification via Instagram Story on Monday, January 4. Posting a screenshot of Page Six's article on the speculations, he stated, "IM NOT STUDYING TO BE A MINISTER OR ANYTHING EVEN CLOSE TO THAT. HAVE NO DESIRE FOR THAT." 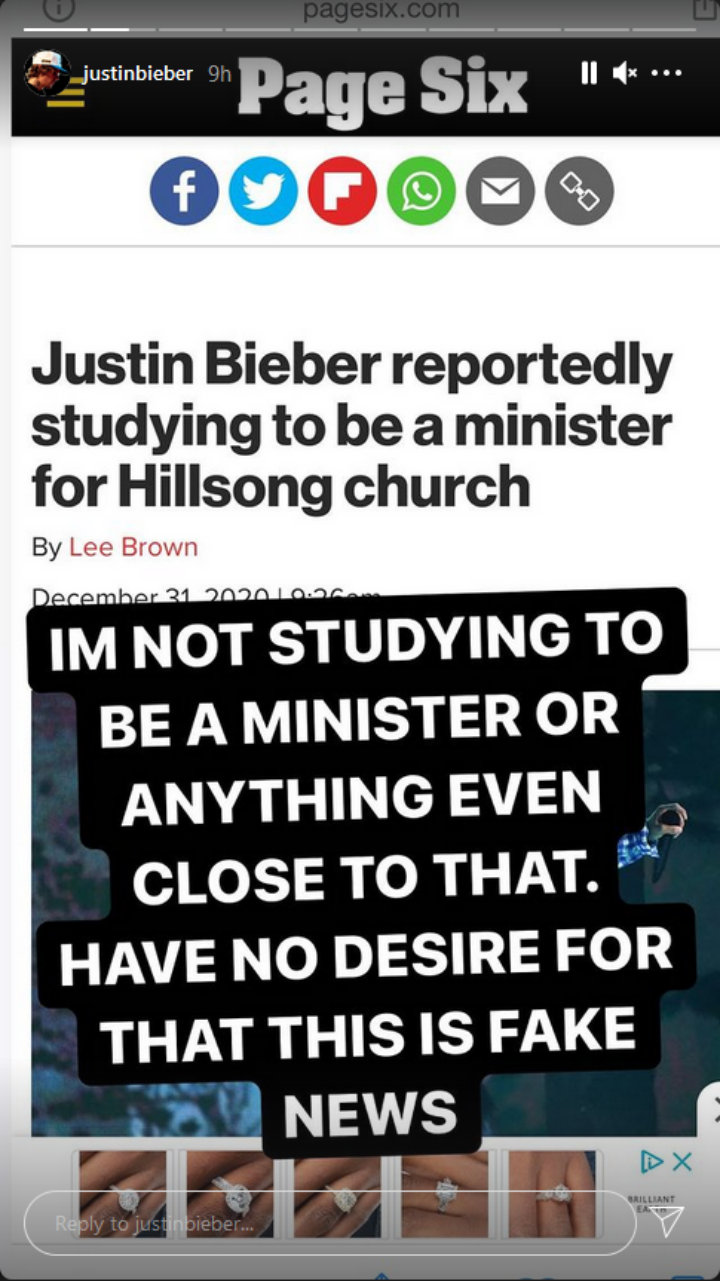 Justin Bieber debunked rumors about him studying to become a minister.

The 26-year-old further stressed in another Story, "BTW HILLSONG IS NOT MY CHURCH. FOR CLARITY I AM A PART OF CHURCHOME." In his third post, he shared his perspective on church itself. "Church is not a place. We are the church. We don't need a building to connect with god. God is with us wherever we are," he explained. 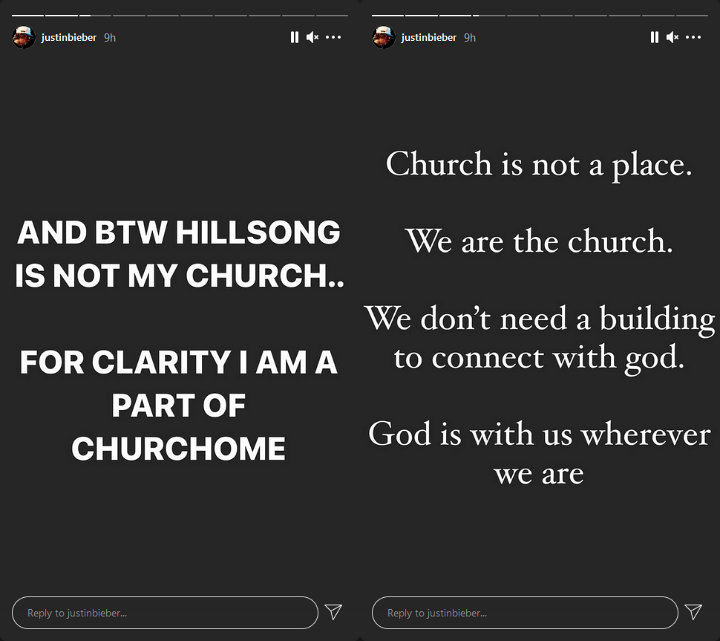 Justin Bieber stressed that he is not a part of Hillsong Church anymore.
See also...

Justin then turned to his Instagram feed to offer a quote about faith. "THE CREATOR OF THE OCEANS AND MOUNTAINS ALSO CREATED YOU! YOU ARE A PART OF THE PLAN, YOUR LIFE MATTERS, HE SEES YOU! HES BEEN PATIENT WITH YOU AS YOU RAN FROM HIM AWAITING YOUR RETURN! HES NOT MAD, HE UNDERSTANDS." In the caption, he emphasized, "YOU CAN NEVER RUN TOO FAR AWAY FROM GODS LOVE. HES BEEN THERE THE WHOLE TIME."

Justin's statement came after his spiritual mentor Carl was fired by Hillsong Church in November 2020. Megachurch's founder Brian Houston told PEOPLE that Carl was terminated after "ongoing discussions in relation to leadership issues and breaches of trust, plus a recent revelation of moral failures."

Shortly after his firing, Carl revealed that he was dismissed because he cheated on his wife Laura Lentz. Sharing his family portrait on Instagram, he penned, "I was unfaithful in my marriage, the most important relationship in my life and held accountable for that. This failure is on me, and me alone and I take full responsibility for my actions."

Carl went on to issue his apology. "I am deeply sorry for breaking the trust of many people who we have loved serving and understand that this news can be very hard and confusing for people to hear and process. I would have liked to say this with my voice, to you, in person because you are owed that. But that opportunity I will not have," he noted.

Report: Michael Keaton to Return as Batman for DCEU Films