Among the first to be eligible in receiving the Pfizer-BioNTech vaccine in the U.K., the 'Lord of the Rings' star claims to be feeling 'euphoric' upon getting one at the Queen Mary University Hospital in London.

AceShowbiz - Ian McKellen has gotten vaccinated for COVID-19. Among the first to be eligible in receiving the Pfizer-BioNTech vaccine in the United Kingdom, the "Lord of the Rings" star had no hesitation in recommending others to do the same.

On Thursday, December 17, the 81-year-old English native took to Twitter to express his gratitude as well as to encourage his fans and followers to get the coronavirus vaccine. "I feel very lucky to have had the vaccine. I would have no hesitation in recommending it to anyone," he tweeted. 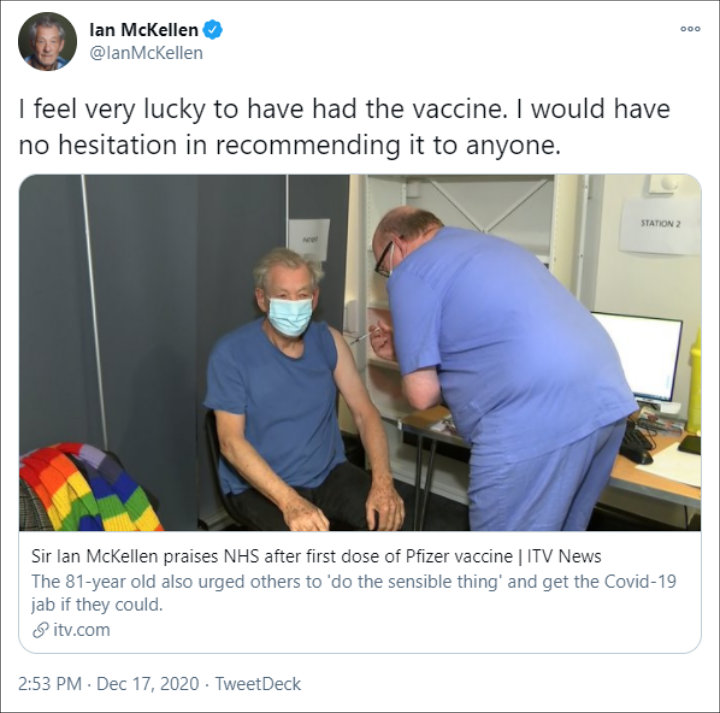 Ian McKellen encouraged his fans to get COVID-19 vaccine.

"The Hobbit: An Unexpected Journey" star was given the vaccine on Wednesday, December 16 at the Queen Mary's University Hospital in London. In a clip obtained by ITV, he could be seen throwing up his arms in the air to give a nurse an elbow bump after he got his first dose of the Pfizer.

Ian then praised National Health Service by quipping, "Next time I come, well no, six days after I next come I'm going to give them all a big hug - is that allowed? I don't know." He added, "That's the real bonus of all this, to watch and see what works in this country and what doesn't work - and it seems to me the NHS is right at the top of the list for institutions that do work."

"Of course, I know I wouldn't be alive if it wasn't for the NHS. I'm a little bit older than the NHS but when I was a kid, having good medical treatment available when it was needed - what a wonderful notion," Ian continued. When speaking about the vaccination, he claimed, "It is invasive of course, it looks like a weapon - a needle - but it isn't, it's a friend!"

The Roy Courtnay of "The Good Liar" emphasized the importance of getting the vaccine. He suggested, "I would encourage everybody to do the sensible thing, not just for themselves but for everybody else because if you're virus-free that helps everybody else, doesn't it?"

In another interview with Daily Mail, Ian could not hide his excitement upon getting the vaccination. "It's a very special day, I feel euphoric! Anyone who has lived as long as I have is alive because they have had previous vaccinations," he gushed. "The take-up amongst the older generation will be 100 per cent - it ought to be - because you're having it not just for yourself but for people who you are close to - you're doing your bit for society."

Ian was not the only celebrity receiving the COVID-19 vaccine. On Tuesday, December 15, celebrity chef Prue Leith also shared on Instagram a picture of herself sitting in a doctor's office in Oxfordshire, England. "Who wouldn't want immunity from #Covid19 with a painless jab?? #vaccine," the 80-year-old wrote in the accompaniment of the post.