In a 'Dionne Warwick Talk Show' skit aired on December 12, Ego Nwodim impersonates the 'Walk On By' singer as she presses her guests about her social media feud with Wendy Williams.

AceShowbiz - Dionne Warwick was delighted over her "Saturday Night Live" parody. Upon learning that she got impersonated by Ego Nwodim in a "Dionne Warwick Talk Show" skit for the December 12 episode of the sketch comedy show, the "Walk On By" songstress was quick to share her thought, calling the spoof "a hilarious birthday gift."

The legendary singer, who turned 80 on Saturday, December 12, took to Twitter to offer her reaction. "This was a hilarious birthday gift. Thank you, @nbcsnl," she gushed. "That young lady's impression of me was very good and who knew @BrittaniWarrick had so many jobs?" In another tweet, she praised Ego by writing, "You did a wonderful job, baby. You are a star. @eggy_boom." 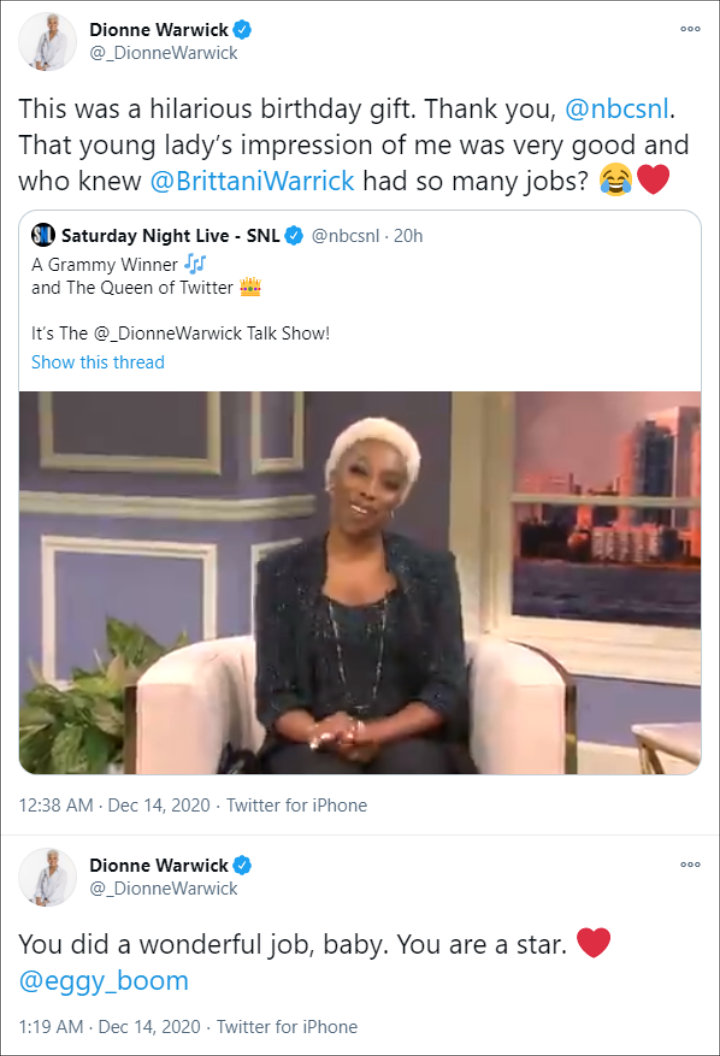 In the "Dionne Warwick Talk Show" skit, Ego's Dionne sat down for some chats with a number of guests. They included Harry Styles who was played by Timothee Chalamet, Billie Eilish, portrayed by Melissa Villasenor, Timothee Chalamet parodied by Chloe Fineman, and Machine Gun Kelly who was impersonated by his pal Pete Davidson.

When chatting with Timothee's Harry, Ego's Dionne pressed him about her social media feud with Wendy Williams. She asked, "Why is Wendy Williams being a b***h to me? She started beefing and now she's acting like she can't finish." In response, the fake Harry replied, "I'm sorry, I don't know who Wendy Williams is." The host then quipped, "Yeah, I knew I liked your a**."

The "SNL" sketch came days after Dionne blasted Wendy on Twitter for making bad remarks about her on the latter's show. "A friend alerted me that Wendy Williams was spending a lot of not nice time speaking on me. I tuned in to her show to catch the last few minutes of her speaking about me and as in the past she seems not to be able to speak without maliciously made comments," she wrote the December 9 post.

"My hope is my name will refrain from being spoken or thought of by her as this conversation was held a few years ago letting her know there was nor would be any need for her to say the name Dionne Warwick for any reason. I don't believe one has to be mean to get noticed," she continued. "There's an old saying you can catch more flies with honey than with vinegar! Try it Wendy you might like it!"