Enlisting 'Spiderhead' costume designer Dan Blacklock as his 'dad,' the 'Thor' actor jokingly calls out the 'Deadpool' star as a 'd**khead' and the 'least favorite Canadian in the whole world.'

AceShowbiz - Chris Hemsworth is another celebrity finding himself entangled in a fun feud with Ryan Reynolds. Upon learning that the "Deadpool" star has enlisted his mother Tammy Reynolds to talk smack about him, the "Thor" actor decided to get revenge.

The 37-year-old made use of Instagram on Wednesday, December 9 to offer his clapback. In a clip that captured him with his costume designer friend Dan Blacklock, he began firing back, "Hey, Ryan Reynolds. What's up, man? I saw you got your mom to trash talk me and say some horrible things about me, so I've got my dad here to say a few things about you."

Chris went on to ask his "dad" Dan to say about the things they discussed prior to the recording. While Dan did not have anything bad to say about the husband of Blake Lively, the Australian native pressed on, "Tell him all the things we discussed. You hate him. He's a d**khead. The worst actor. Your least favorite Canadian in the whole world."

In the caption of the post, Chris informed his followers that the hilarious social media battle was all for Agbo Superhero Fantasy Football Charity League which benefits several organizations around the world. He penned, "@agbofilms superhero fantasy football league trash talking is in full swing!! It's all for charity so no hard feelings right @vancityreynolds! @auschildhood #agbosuperheroleague @danblacklock08."

Chris' retaliation came after Ryan requested Tammy to read insults that he wrote for "The Avengers" actor. In a Twitter video he shared on Monday, December 7, his mom said, "Chris Hemsworth is everyone's least-favorite Australian. And as a reminder, Hugh Jackman still exists. Chris is an a**hat who looks like a bodybuilder f**ked a platypus." 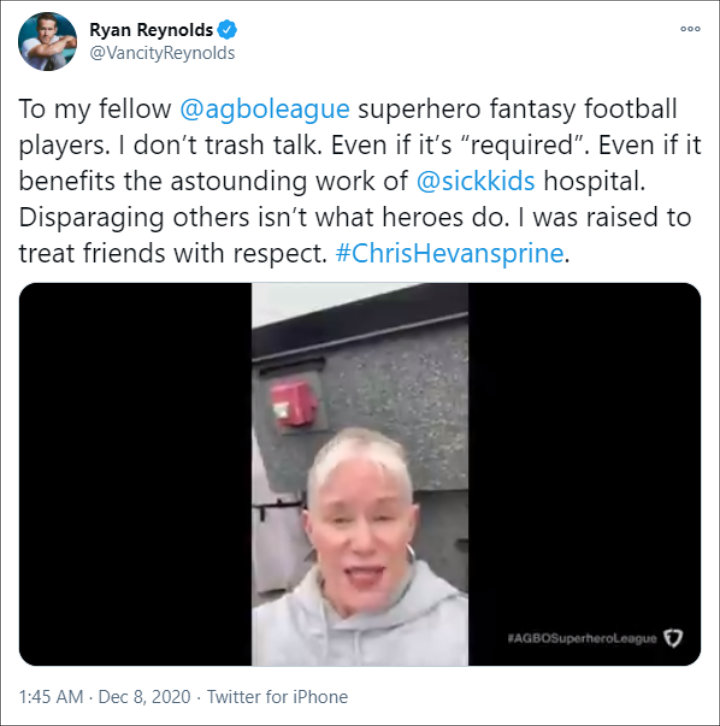 Tammy went on to narrate some censored words. However, she was quick to apologize to Chris, saying, "I am so sorry for my son, Ryan. It's my fault, I brought him up wrong. I loved you in 'Wonder Woman', it was the best." The last message was a reference to Chris Pine who starred in the 2017 movie.