The fifth edition of the custom-designed footwear, Post Malone x Crocs Duet Max Clog II, has sold out within a few hours after it was released in the United States.

AceShowbiz - Post Malone never forgets where he came from. When his fifth collaboration with Crocs hit the market for the first time on Tuesday, December 8, the "Circles" hitmaker made sure that every single student at his alma mater Grapevine High School get a free pair of his custom-designed footwear.

Revealing the donation made by the 25-year-old singer was Grapevine school principal Alex Fingers. "Thank you @PostMalone for always giving back to your community! Your fellow @Grapevine_HS Mustangs are so proud of your success! #ThanksPosty #Posty," he tweeted along with photos of the Post Malone x Crocs Duet Max Clog II donation. 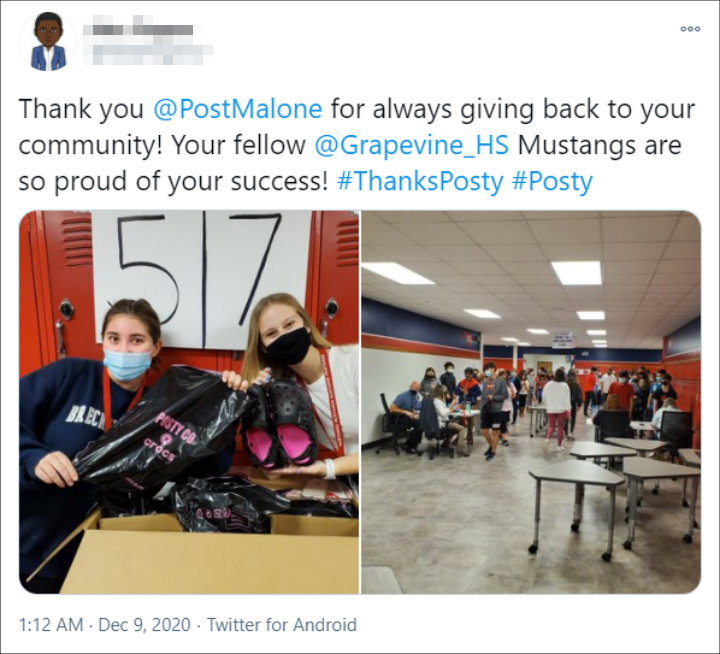 Principal Fingers also made the announcement of Malone's charitable act through a video obtained by TMZ. Informing his students that the "Wow." singer noticed the good work they had been doing for the community, he said, "One of our own Grapevine High School graduate Post Malone has noticed your work and decided to give you guys a little bit of something descending into the holiday season on the right foot." The educator then showed off the pair of Crocs that he got.

"Post Malone does great and give him back to our community," the educator continued. "He loves Grapevine High School and the community that raised him here, and he wanted to do something to give back to his community that has kind of nurtured him and allowed him to have the levels of success that he's had."

Post Malone x Crocs Duet Max Clog II has sold out within a few hours after it was released in the United States. The "Better Now" singer himself shared the good news via Instagram along with several pictures of the pink and black clogs. "Sold out in the US. We are launching in Europe & Asia soon:)," he captioned the post.

Malone, whose real name is Austin Richard Post, first teamed up with the company back in 2018 for the limited-edition Post Malone x Crocs Dimitri Clog. In the following year, they released the shoes which were only available in Australia.