While some fans applaud the decision, some others are not buying the 'Keeping Up with the Kardashians' star, believing that the famous clan will throw a bash anyway.

AceShowbiz - There won't be Kardashian-Jenner family's annual Christmas Eve party this year. According to Khloe Krdashian, they opt to forgo the bash considering that COVID-19 cases are getting bigger in California. She revealed the cancellation on Twitter on Sunday, December 6.

The "Keeping Up with the Kardashians" star responded to a fan who asked, "@khloekardashian okay Khloe u doing the annual Kardashian's Christmas party this year." To that, the mom of one responded, "The Covid cases are getting out of control in CA. So we decided that we're not doing a Christmas Eve party this year."

She went on writing, "It's the first time we will not be having a Christmas Eve party since 1978 I believe. Health and safety first though! Taking this pandemic seriously is a must." 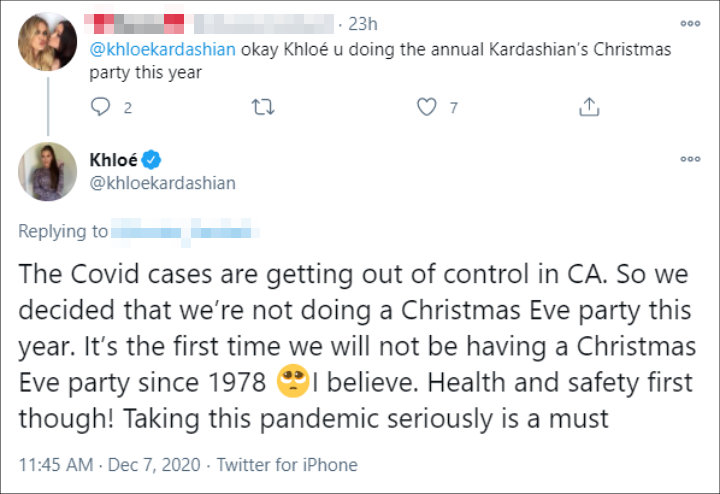 Fans applauded their decision to cancel the bash amid the pandemic. "Yes Khloe !!! We all must stick together to beat this pandemic . Australia has been doing okay so we are allowed out FRIEMDS and family over for Christmas !!!! So thankful," the aformentioned fan replied. "sending prayers stay strong," one other added.

However, some others were still throwing hate to the famous clan. "Why stop throwing parties now? Covid hasn't stopped you idiots this whole year but now you want to pretend to be a hero? PLEASE FOR THE LOVE OF GOD LET’S STOP GIVING THESE IDIOTS A PLATFORM!!!" a naysayer wrote. "Not you saying this after you had a huge Halloween party," another user said, though it was actually Kendall Jenner who threw the Halloween/birthday party back in October.

Believing that Khloe and her family will still have a party anyway, a fan reacted, "In reality Khloe just meant: oh we will be having a party, but instead of a party we're just gonna call it a family get together." Not buying her words, someone replied, "HAHAHAHAHA WHEN HAVE THE KARDASHIANS TAKEN COVID SERIOUSLY FOR THE LAST 9 MONTHS?! I am deceased."

Prior to this, Kim Kardashian and Kendall received huge backlash for throwing a big party to celebrate their respective birthday. At the time, Khloe defended her sister Kim during her appearance on "The Ellen DeGeneres Show", saying, "This year is a frustrating year, I get it. I think there's so many frustrations going on for everybody. But also it's her 40th and this is something that she wanted to do for us, it was such a nice thing."