The 'Black Panther' star comes under fire after sharing a video that questions what's in the COVID-19 vaccine before defending herself, 'I'm just concerned about what's in it that's all.'

AceShowbiz - Letitia Wright has taken the heat for sharing her thoughts on the proposed COVID-19 vaccine. The actress was heavily criticized after she posted a video that questions the chemical Luciferase, one of the ingredients of a developing vaccine, on her Twitter page.

Following her tweet, the Shuri of the Marvel Cinematic Universe was accused of being an anti-vaxxer and spreading false information. Her name became trending on the blue bird app and so did the movie "Black Panther 2", in which she is set to reprise her role.

She then took time to respond the backlash. "if you don't conform to popular opinions. but ask questions and think for yourself....you get cancelled," she defended herself over her controversial view on the COVID vaccine.

Letitia Wright defended herself after backlash for sharing an anti-vaccine video.

Letitia's follow-up tweet only earned her more criticism, with one writing to her, "Anti-Vaxxers don't 'Think for themselves'. They're crackpots who are spread false information because they're afraid either they or their kids will end up autistic."

"You're not being cancelled for having a different opinion, you're being criticized for spreading false information," another similarly told the 27-year-old star. A third user blasted her, "ignoring scientists isn't an 'opinion' it's you being an idiot."

A "disappointed person" added, "Advocating dangerous ideas is not the same as thinking for yourself. You have platform and voice that reaches many and what you do with it matters. So incredibly disappointed. What a f**king letdown you are." To this tweet, Letitia replied, "His main point is what is in it and is it safe for our bodies to take. I took that point from it. If it disappoints you that I would simply ask this. Then my bad."

A fan was also shocked by Letitia's stance on vaccine. "Letitia Wright I hate it had to be you sis WHY," the said fan tweeted. The actress again defended herself, "just interested to know what's in it. Guess I'm wrong for asking that." 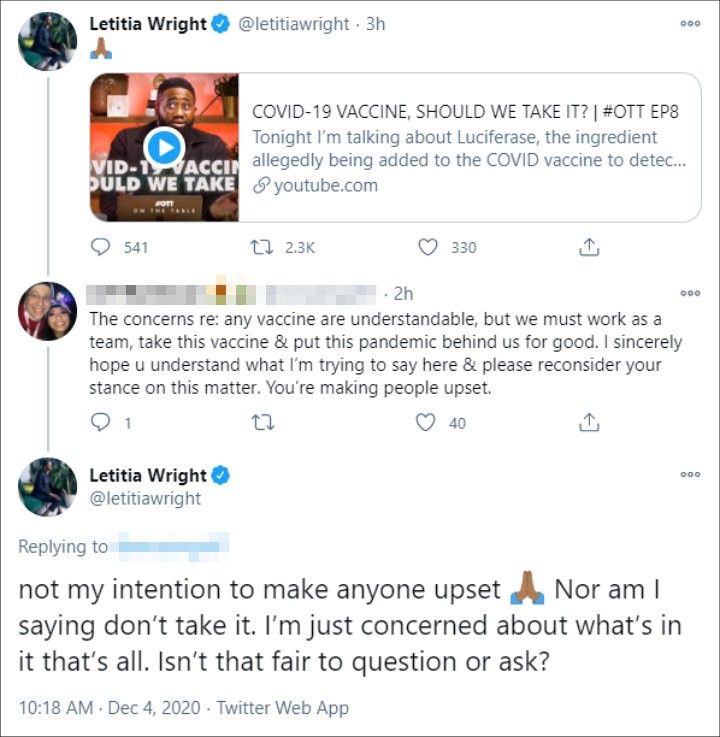 The 'Black Panther' star replied to a critic's comment.

Later, when one person commented on her controversial tweet, "The concerns re: any vaccine are understandable, but we must work as a team, take this vaccine & put this pandemic behind us for good. I sincerely hope u understand what I'm trying to say here & please reconsider your stance on this matter. You're making people upset," she explained, "not my intention to make anyone upset Nor am I saying don't take it. I'm just concerned about what's in it that's all. Isn't that fair to question or ask?"